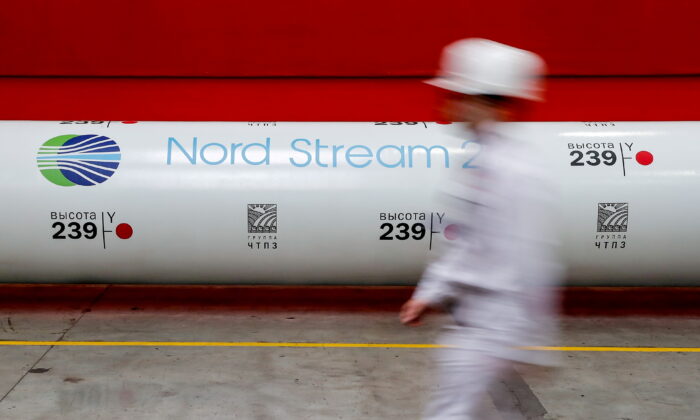 The logo of the Nord Stream 2 gas pipeline project is seen on a pipe at the Chelyabinsk pipe rolling plant in Chelyabinsk, Russia, on Feb. 26, 2020. (Maxim Shemetov/Reuters)
Business & Economy

U.S. Secretary of State Antony Blinken warned that Russian aggression toward Ukraine will jeopardize the functioning of the Nord Stream 2 gas pipeline during a Sunday appearance on Meet the Press.

“If Germany were more open to, essentially, shutting down the Nord Stream 2 pipeline, do you think Vladimir Putin would pay more attention?” asked Chuck Todd during Sunday’s interview.

“That pipeline … doesn’t have any gas flowing through it right now,” said Blinken. “And, in fact, it’s a source of leverage on Russia, because to the extent President Putin wants to see gas flowing through that pipeline, if and when it becomes operational, it’s very unlikely or hard to see that happening if Russia has renewed its aggression on Ukraine.”

This interview comes as Russia amasses troops on its border with Ukraine, now numbering upwards of 120,000 according to Ukrainian intelligence. Whereas previous troop movements along the Ukrainian border have been justified as routine military exercises, Putin has made no such explanation of these recent deployments. Putin has made no secret of his irredentist ambitions on Ukraine, which he views as a rightful extension of historical Russian territory.

Since its inauguration in 2011, the Nord Stream pipeline has been a source of controversy. The United States has opposed the project for allegedly allowing a greater degree of Russian influence in Central Europe by providing a supply of natural gas directly. Meanwhile, because the pipeline runs underneath the Baltic Sea, it allows Russia to bypass land intermediaries such as Ukraine and Belarus. This would allow Russia to turn off the pipelines in order to deprive those border countries of gas while still maintaining a direct flow to Central Europe, giving Russia more leverage over the border countries.

Nord Stream 2 was completed in September of this year after the Biden administration lifted sanctions on Russia, but the flow of gas has been delayed by the fragile geopolitical situation.