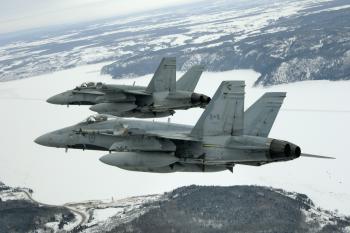 CF-18 Hornets support the air defense of North America, train with Canada's allies, and respond to situations anywhere in the world as part of Canada's commitment and contribution to international peace and security. Every Christmas they have the additional duty of escorting Santa Claus as he flies across Canada delivering presents to children. (Private Pierre Theriault, 3 Wing/CFB Bagotville Imaging Section)
US

Cindy Chan
View profile
Follow
biggersmaller
Print
Captain Dave Patrick has been with the 425 Squadron at 3 Wing/CFB Bagotville, Quebec, for only six months, but the 10-year veteran aviator has already received a plum assignment.

He is one of four fighter pilots from the Canadian region of North American Aerospace Defense Command (NORAD) selected to escort Santa Claus on Christmas Eve as St. Nick and his famous reindeer fly across Canada delivering presents to children.

Capt. Patrick and Capt. Yannick Jobin of 3 Wing will fly two CF-18 fighter jets to welcome Santa as soon as radar operators alert them that the sleigh is approaching North America off the coast of  Newfoundland and Labrador.

Santa typically flies back and forth across the Canada-U.S. border, said Capt. Patrick. While flying in the U.S., American NORAD fighter pilots in either F-15s, F-16s, or F-22s “get the thrill of flying with Santa,” he said.

Capt. Patrick has been briefed that “Santa flies very, very fast. We don’t know the top speed of his sled. We do know that it is faster than we can fly, but he does slow it down so we can intercept him and escort him.”

NORAD pilots, who are well prepared to carry out this mission, will be flying about 10 feet away on either side of Santa’s sleigh.