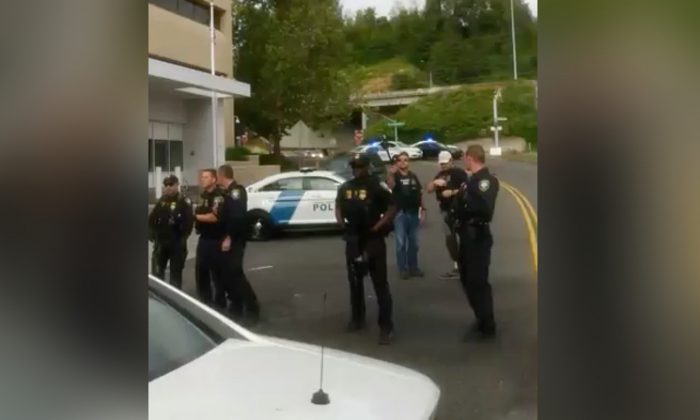 Police outside the Immigration and Customs Enforcement (ICE) building in Portland, Oregon. (Bryant King via Storyful)
US News

Federal officers assigned to police the Immigration and Customs Enforcement (ICE) building in Portland, which has been targeted by protesters calling for the abolishment of the agency, said they were subjected to racist insults from the protestors.

Multiple non-white officers said that they endured racially charged insults and taunting, according to emails obtained by The Oregonian.

The insults came during a demonstration that has continued since June 17 outside the ICE building.

One black officer told an administrator that protesters began “yelling racial slurs” at him, including the N-word.

Protesters told the officer that he was a “blood traitor” and an Uncle Tom.

“These racial slurs have been directed at me throughout the entire length of the deployment,” the officer wrote.

Another officer, a female of Hispanic and Native American descent, said that protesters told her that she is a weak female and a traitor. Protesters also used derogatory terms for Hispanic people.

“I was berated for so long I can’t even remember everything that was told to me,” the officer wrote in an email.

Another officer, who was not identified further, said that he and other federal agents were insulted and harassed almost continually by the protesters, who told the officers they were murderers, rapists, and Nazis.

“They have yelled continuously that they hope we die, they hope our families die,” the officer wrote.

City officials allowed the protesters to camp out and form a ramshackle area near the ICE office, but police officers on July 25 finally began clearing the sprawling camp early Wednesday morning, days after the protesters were told they had to leave, reported KATU.

Most protesters had left after the notice but the remaining ones had erected barricades and faced off against the police, but to no avail.

The move came several weeks after federal officers removed the protesters from federal property on June 28; the group moved to city streets and sidewalks near the building after that.