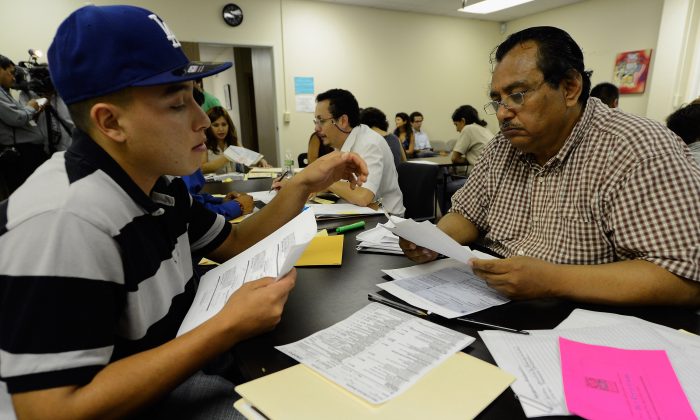 An illegal immigrant receives help filling in his application for the Deferred Action for Childhood Arrivals (DACA) program in Los Angeles on Aug. 15, 2012. (Kevork Djansezian/Getty Images)
US News

Noncitizens Use Nearly Twice the Welfare of Native-Born Americans: Study

Noncitizens, including legal and illegal, use nearly twice as much welfare as native-born Americans, according to a study.

Out of households headed by noncitizens, 63 percent use some kind of welfare program, compared to 35 percent of houses headed by native-born Americans, the Center for Immigration Studies said, citing the Census Bureau’s Survey of Income and Program Participation in 2014.

Of the non-citizens in the Census Bureau data, about half are in the country illegally. Non-citizens also include long-term temporary visitors, such as students, permanent residents who have not been naturalized, or green card holders.

Including the Earned Income Tax Credit, 31 percent of non-citizen-headed-households receive cash welfare, compared to 19 percent of native-American-headed households; if the credit isn’t included, then the receipt of cash welfare among non-citizen households drops to 6 percent, versus 8 percent for the other category.

There are barriers that are supposed to prevent most new legal immigrants, or green card holders, from accessing most welfare programs, in addition to illegal immigrants and temporary visitors, but there are a number of ways to skirt the barriers. Some states provide welfare to all one, two, or three of the categories while illegal immigrants can get benefits on behalf of their U.S.-born children.

According to the center, “The primary reason welfare use is so high among non-citizens is that a much larger share of non-citizens have modest levels of education and, as a result, they often earn low wages and qualify for welfare at higher rates than natives.” Of the households, 58 percent are headed by someone with no more than a high school education, compared to 36 percent of the native households.

Of non-citizen households headed by someone with a college degree, only 28 percent use welfare.

The study was published in December.

It drew attention after President Donald Trump said on March 11 that he doesn’t want immigrants coming to the United States that will be dependent on welfare.

“I don’t want to have anyone coming in that’s on welfare,” Trump told Breitbart News. “We have a problem, because we have politicians that are not strong, or they have bad intentions, or they want to get votes, because they think if they come in they’re going to vote Democrat, you know, for the most part.”

The answer came in response to a question from Breitbart that cited the study.

Trump said that unlike him, Democrats want just about anyone to come into the country, regardless of education level or their capacity to support themselves. A number of Democrats have said they’re against a border wall while many recently voted in favor of illegal immigrants being allowed to vote.

“You do need workers. You have homes in Houston, and they can’t get people to build the homes—and lots of other places. But because of what’s happened, and because of the people coming up, they want them to come in and they don’t care how they come in.”

The president added, “I don’t like the idea of people coming in and going on welfare for 50 years, and that’s what they want to be able to do—and it’s no good.”