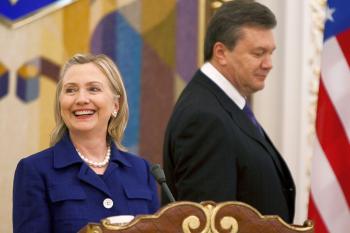 Nonaligned Ukraine Dances With Both East and West

Since Russian-leaning Victor Yanukovych took the presidency in February, he has steered the country off its path towards NATO set by his pro-Western predecessor Viktor Yushchenko.

Last month, under Yanukovych’s direction, Ukraine's non-alliance became law. The law, however, still leaves the door open for Ukraine to join a regional military alliance—but it does not specify which one.

Recently, Yanukovych has been cozying up to Russia. Relations between the two countries, which had been deadlocked for years under the previous pro-Western administration, have been steadily warming. The two countries have begun cooperating across a broad range of issues including the economy, gas prices, nuclear power, and satellite navigation.

In April, Russia opened a branch of its military alliance the Collective Security Treaty Organization (CSTO) in Kiev. The Kremlin expects the two countries to cooperate more on security issues.

Analysts say that the new military block has been created with a similar, parallel structure to NATO. It now includes Russia, Belarus, Armenia, Kazakhstan, Uzbekistan, Tajikistan, and Kyrgyzstan.

CSTO was established in 2002. In 1991, the last Russian-led alliance, the Warsaw Pact, was dissolved after the collapse of the Soviet Union.

At present, Ukraine is still continuing cooperation agreements with NATO and the U.S. made it clear after the non-alliance law was passed, that the door to NATO is still open.

“Ukraine is a sovereign and independent country that has the right to choose its own alliances and NATO's door remains open,” said U.S. Secretary of State Hillary Clinton on a trip to Ukraine in July.

"But it's up to Ukraine to decide whether or not you wish to pursue that or any other course for your own security interest," Clinton continued.

Public support in Ukraine to join NATO has been waning over the last few years.

Ukraine’s nonaligned status means it needs to sustain its military forces, which have suffered from a lack of financing for years.

Some analysts doubt that the cooperation with CSTO will be useful for Ukraine in terms of what the organization can offer.

“CSTO does none of the above and it has never done so,” said Vladimir Gorbach, a political analyst with the Kiev Euro Atlantic Cooperation Institute.

“CSTO is made up of post-Soviet armies—countries which in terms of social development do not act as democratic ones, but rather as authoritarian ones. There is no sense to cooperating with that block,” he said.

When violent clashes claimed hundreds of lives in Kyrgyzstan in April and June this year, the block failed to do anything to calm the situation.

With additional reporting by NTDTV