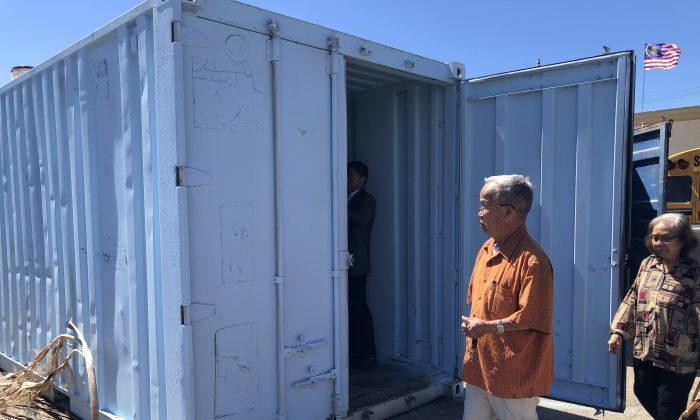 Non-Profits to Use Shipping Containers for Showers for the Homeless

Local organizations from the Greater Los Angeles plan to use shipping containers to provide showers for the homeless, it was announced in Garden Grove, Calif. on Sept. 16.

Supporters of the initiative said it would help raise homeless people’s self-esteem and also help them get job interviews.

The number of homeless people in both the City of Los Angeles and most of the Los Angeles county area has surged 75%, from about 32,000 to approximately 55,000, in the last six years, according to Los Angeles Times.

Three out of four of these people live in campers, cars, tents and lean-tos, numbering nearly 41,000, reported the newspaper.

Orange County to the south, home of Garden Grove, also has a sizable homeless population.

“When you’re homeless and you can’t take a shower, then your self-esteem goes down. And then, you don’t wanna be around friends, you can’t have a (job) interview,” said U.S. military veteran Francis O’Brien, who is now the executive director of Take It Back Foundation.

O’Brien said that in the late 90s, he started a homeless program in Los Angeles, but as time went on, he moved on to other projects. He didn’t return until he met Dr. Tony Chanh Huu Nguyen in late August, the President of the non-profit Global Community Foundation (GCF), and participated in a tour in downtown Los Angeles to better understand the needs of the homeless.

“Sometimes they’re hopeless, they feel like they can’t get back to the mainstream of society. So what we’re going to do is this: help them take a shower to make them feel human again,” said event participant Paul Moreland.

Why Use Shipping Containers?

Countries with trade deficits, like the U.S., are now facing countless shipping containers abandoned in ports and storage yards, which are also a major eyesore and burden for many communities, according to a statement by GCF.

Using shipping containers is cost-efficient and energy-efficient, and it reduces construction time. They can also be placed on wheels and made mobile.

According to a 2016 article The Pros and Cons of Building with Shipping Containers, “Melting these containers uses about 8000 kWh of energy while refurbishing one into a building uses just about 400 kWh.”

Using shipping containers for construction also costs much less than a conventional house. In addition, these sturdy units can be built in a shorter time frame compared to traditional construction methods, according to GCF.

The organization plans to install water tanks on the containers to collect and store water from rain or the laundry facilities for flushing or other uses, said Tom LaPorte, GCF’s Communication Officer.

The containers will also be solar-powered, so they would not need to be connected to an electricity grid.

The project will work with local government, businesses, other non-profit organizations to help allocate resources, according to LaPorte.

“We’re also putting in metering equipment, so if a business owner says okay for us to (connect to) his line, then we can meter it and then reimburse that business owner for the water we use,” he said.

Funding ‘Didn’t Go to Where It Should Be’

Back in December 2017, Los Angeles Mayor Eric Garcetti called out for federal funds to solve the homeless problem.

“Los Angeles’ homelessness crisis was not created in a vacuum, and it cannot be solved by L.A. alone,” he said at that time, according to Associated Press.

Paul Taylor, founder of Golden State Coalition and former Republican candidate for U.S. Senate, told the Epoch Times that the money spent to solve the homeless problem has been wasted, that “it didn’t go to where it should be.”

“Almost every time, every project they do is a band-aid,” Taylor said. He suggested that the effort should resemble building businesses and creating jobs, and that sustainability and longevity is essential.

Calling the homelessness issue “daunting,” Taylor praised the idea of using shipping containers and hoped it would show love to the homeless and give them hope for their future.

“They could buy them (containers) cheap. There’s a lot of square footage, and they’re strong, durable,” he said. “You can stack a lot of them on top of each other. They got a lot of vertical strength.”

“We’re not actually interested in them going into the shelter to hide or to die in the shelter of an overdose. We want to turn people’s lives around,” Taylor said, adding that he has had a lot of friends who wound up on the streets.

Shipping containers have been used in the military for years to house soldiers and for emergency and disaster housing as well. Even in Europe, there are countries that have utilized them for housing projects and customized home designs.

However, in the U.S., containers haven’t been used widely for human housing because of abundant resources and land. However, the homeless situation appears to be an opportunity to make use of the containers.

“We’re looking at root cause solutions,” said Tom LaPorte. “If you give the man fish, you’d feed him for a day. If you teach him how to fish, you feed him for life.”