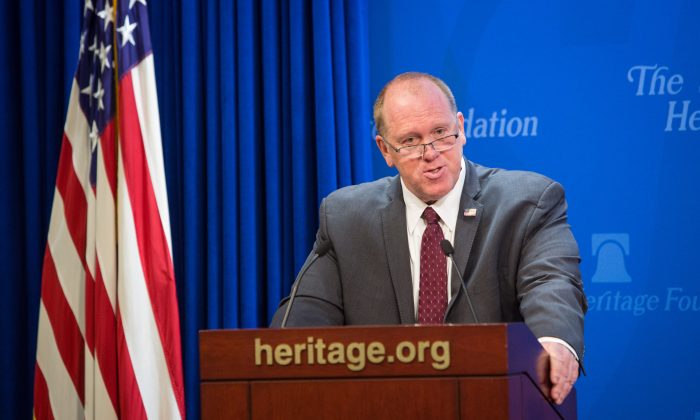 Thomas Homan, acting director of Immigration and Customs Enforcement (ICE), at an immigration event at the Heritage Foundation in Washington on Oct. 17, 2017. (Benjamin Chasteen/The Epoch Times)
US Features

Homan worked for 33 years in immigration enforcement, starting as a Border Patrol agent in 1984. He spent 20 years as a special agent investigating the organizations that smuggle aliens into the United States, and then eight years under former President Barack Obama in charge of ICE’s Enforcement and Removal Operations.

“I actually retired on Jan. 27 for about three hours. On the way out of the ceremony, I got a call from General [John] Kelly [saying] that the president would like me to stay and run the agency,” Homan said at an event at The Heritage Foundation on Oct. 17.

He used the podium to express his frustration with negative media reports about ICE operations.

“We defend public safety and get vilified for doing it,” he said. “What [the media] don’t say is that every one of these people being removed had their due process in this country. They got an order from a federal judge, issued from a bench, and ICE’s job is to execute that order.”

We’re not going to be bullied into not enforcing the law.
— Tom Homan, nominee for ICE director

Homan said he is often characterized as “heartless.”

“If you’ve seen what Tom Homan has seen in 33 years, you would understand my emotion when we talk about this issue,” he said. Homan held back tears as he recounted a 2003 case in Victoria, Texas, where 19 smuggled aliens died in the back of a tractor-trailer.

“The crime scene was kept secure until I got there. I actually walked into the back of that tractor trailer—I was surrounded by 19 dead aliens laying around me, that suffocated in the back of the tractor-trailer. One, a 5-year-old boy. That haunts me to this day, because I had a 5-year-old boy at the time.

“These smugglers don’t care, they’re out to make a buck. They don’t care about the health and safety and well-being of these people.”

Homan said he rescued many hostages while working in Phoenix, Arizona. “Women were raped, children were molested.”

Homan’s pet peeve is sanctuary cities, jurisdictions that create policies to prevent local and state law enforcement from communicating and cooperating with federal immigration authorities. Some sanctuaries, such as in Chicago, New York City, and Los Angeles, forbid immigration agents from going into jails to interview and take custody of convicted criminal aliens. The criminals are instead released back into the community.

“That doesn’t make sense to me,” Homan said. “Every criminal alien that gets released by a sanctuary city that reoffends, has committed a crime that’s preventable.

“Even immigrant communities don’t want criminals in their communities.”

Homan said that as of July 31 this year, almost 10,000 criminal aliens who were released onto the streets—rather than being turned over to ICE—have committed another crime.

Proponents of sanctuary policies say that the policies promote trust in immigrant communities and, therefore, immigrants will come forward to report crimes—purportedly making the community safer.

But Homan said his agents—and the community—are put at greater risk if ICE is forced to locate and arrest illegal aliens in communities, rather than take custody of them in a jail.

“What you have done is force my hand and now I have to go to their homes. When I go into the home and find that bad guy, he’s probably going to have other people with him, who may have immigration issues. My job is to take them into custody, too,” he said.

“So those politicians that chose to make a political statement over that of public safety, that want to tell their community [that] sanctuary cities protect the community—wrong. Because now you just put all these people who weren’t on my radar, on my radar.”

Homan said ICE has a “sensitive location” policy, which precludes agents to arrest illegal aliens at churches, schools, and hospitals without prior approval from headquarters. “And it has to be a significant public safety issue and national security issue to do that,” he said.

He said politicians and media stoke fear about ICE, and at the same time, groups that advocate for illegal aliens tell them not to answer their door at home to ICE.

“And when you’re in New York City, Los Angeles, or Chicago, chances are, when you pull that car over, you’re within a block or two of a school, or a church, or a hospital.”

“And at the end, if a judge issues a final order, they need to be executed. Because if they’re not, there’s absolutely no integrity in this entire system,” he said.

“We’re not going to be bullied into not enforcing the law. There’s not another law enforcement agency in this country where people ask them not to enforce the laws.”