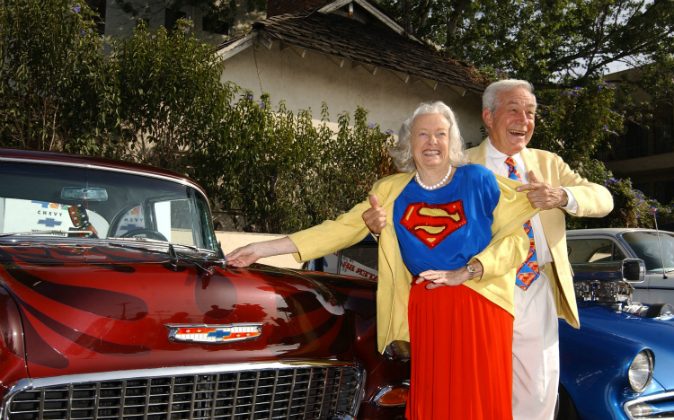 Noel Neill, the Original Lois Lane From Superman Dies at 95

Noel Neill, the original “live action” Lois Lane from Superman passed away in her Arizona home after a long illness on July 3, according to friend and official biographer Larry Ward. Neill was 95.

“Noel truly was Lois Lane, and for many of us, she was the first working woman seen on television,” Ward wrote on Facebook. “She was kind, selfless, hardworking, funny with a quick wit, and assertive—all the same qualities that embodied the character of Lois Lane. Noel Neill maintained that bright, perky and engaging personality up until her death.”

Born in Minneapolis in 1920, the entertainment bug bit Neill early on, she was performing in local productions by age five. Neill, a dancer and singer, played in many of the RKO Orpheum Theatres throughout the midwest regions, including performing at county and state fairs in the 1930s.

Shortly after graduating high school, Neill along with her mother, vaudeville performer LaVere Neill, traveled to Los Angeles, where she was booked to sing with Bing Crosby’s band at the Del Mar Racetrack. It was with the backing of Crosby that propelled Neill to sign a seven-year contract with Paramount Pictures in 1941. In the span of her illustrious career, Noel acted in over 100 films, including short films with non-speaking roles through to leading ladies such as Lois Lane.

Her portrayal of Lois Lane shot Neill into stardom. Acting alongside Kirk Alyn—the first Superman—Neill proved to be witty and funny. Superman was a hit and the sequel that followed, “Atom Man Vs Superman” was equally successful.

Neill’s work in the 1950s television series, “The Adventures of Superman” solidified her legacy as “the intrepid reporter.” Her role as a trained journalist fit perfectly—Neill was a writer for “women’s Wear Daily and her father David Neill was a Minneapolis Star Tribune news editor.

After “Adventures of Superman” was canceled, Neill gave up acting. It was the emergence of re-runs of Superman that led to cameos by Neill on later series. She appeared in a 1991 episode of the television series “The Adventures of Superboy,” in the 2004 superhero film spoof “Surge of Power” (2004) and as Lex Luthor’s (Kevin Spacey) elderly wife Gertrude Vanderworth, in “Superman Returns” in 2006.

Neill received a Golden Boot award for her contributions to Western films. A statue of Neill as Lois Lane was erected and dedicated to the actress in Metropolis, Illinois, in 2010.

Funeral services will be private with a public memorial held later this year.