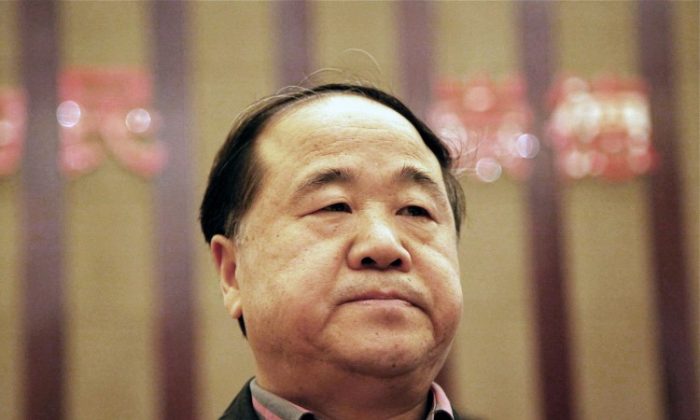 Nobel Prize in Literature Goes to Chinese With Regime-Friendly Bent

The Swedish Academy on Thursday gave the Nobel Prize in Literature to a Chinese author who enjoys friendly relations with the Chinese Communist Party, attracting the ire of netizens, who saw it as a “gift” from the Academy to the Party before its 18th Congress, and an apparent balance to previous awards to dissident figures.

The Chinese author Mo Yan was given the prize on Oct. 11, announced in a one sentence note which said he “with hallucinatory realism merges folk tales, history and the contemporary.”

Mo Yan, a pseudonym for his real name, Guan Moye, is most famous for a novel called Red Sorghum, which explores peasant life in China over four decades, beginning in the 1930s when Japan invaded.

The politics, rather than strictly the literary questions, captivated commentary online.

Another Internet user retorted: “Why don’t you just say that this is a gift from the Nobel Committee to the Communist Party, for the 18th Party Congress, then?”

A contrast between the views expressed by the Communist Party on this award and that previously given to a Chinese writer Gao Xingjian, thoroughly disliked by the regime, who won the same prize in 2000, was gleefully pointed out by netizens. Back then the Party’s mouthpiece People’s Daily said the prize was used “as a political tool” and had “lost its authority.”

With Mo Yan’s success, the People’s Daily said that “Chinese people have been waiting for this day too long!”

Dissident writers disparage Mo Yan for what they see as his close association with Chinese officialdom. “Mo Yan” in ancient Chinese means something akin to “Do not speak”—the name receives an ungenerous interpretation by critics in the context of censorship, self-censorship, and the benefits that writers who hew closely to the government line are able to enjoy.

Before the prize was announced, prominent Chinese writer and dissident Mo Zhixu warned readers of his blog: “There are 3 things that the world should know about Mo Yan if he wins the prize: 1. He walked out with Chinese officials at the Frankfurt Book Fair in 2009, in protest of dissident writer Dai Qing’s attendance. 2. He refused to talk about Nobel Peace Prize winner Liu Xiaobo’s harsh sentence; 3. He hand-copied Mao Zedong’s speech on ‘Yan’an Talks on Literature and Art.'”

The latter action refers to a campaign where writers expressed devotion to Chinese communist ideology expressed in Mao’s famous 1942 talk, where he lays down the line on the purpose of the arts under a communist regime. The speech concludes that the arts are meant to serve the Party.

“Congratulations, judges,” Mo Zhixu wrote, icily. “With this action, you destroy the Nobel Prize in Literature.”

Mo Yan’s works, however, do contain often direct and unflattering depictions of repressive communist policies, such as the one-child policy.

In 2006, the author remarked on his work and character to Xinhua, the state mouthpiece, in an interview. “In ordinary life I’m a lackey, a coward, and a pitiful wretch, but when I write novels I have the courage of a bandit, the desires of a libertine, and an audacity that’s monstrous.”