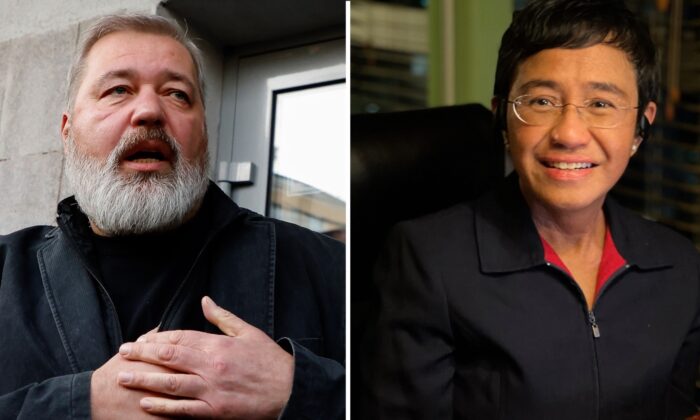 The 2021 Nobel Peace Prize was awarded on Friday to two journalists, Maria Ressa and Dmitry Muratov, for their efforts to safeguard freedom of expression in the Philippines and Russia.

Ressa, a Philippines journalist, became the first Filipino to win the peace prize, and also the first woman to claim the prestigious award by the Nobel committee this year.

The Swedish award-giving body said in a statement announcing the winners that Ressa uses freedom of expression in her work “to expose abuse of power, use of violence and growing authoritarianism” in the Philippines.

In 2012, Ressa became the co-founder of the digital media company Rappler, which put focused critical attention on the “controversial, murderous anti-drug campaign” allegedly committed by the regime of Philippine leader Rodrigo Duterte.

Russian journalist Muratov is one of the founders of the independent newspaper Novaya Gazeta, founded in 1993. He has been the editor-in-chief for the Russian paper for a total of 24 years.

The Nobel committee called it “the most independent newspaper in Russia today, with a fundamentally critical attitude towards power.”

Since the paper’s founding in 1993, it has published critical articles on subjects ranging from corruption, police violence, unlawful arrests, electoral fraud, and “troll factories” to the use of Russian military forces both within and outside Russia, the committee added.

Muratov said on Friday he dedicates the prize he won to six fellow Novaya Gazeta journalists who were reportedly murdered for their work.

“Igor Domnikov, Yuri Shchekochikhin, Anna Politkovskaya, Stas Markelov, Anastasia Baburova, Natasha Estemirova—these are the people who have today won the Nobel Prize,” Muratov said, reciting the names of six slain journalists or contributors to the paper whose portraits hang in its headquarters.

“We will leverage this prize in the interests of Russian journalism which [the authorities] are now trying to repress,” he told Podyom, a journalism website.

“Free, independent and fact-based journalism serves to protect against abuse of power, lies, and war propaganda,” the committee said. “Without freedom of expression and freedom of the press, it will be difficult to successfully promote fraternity between nations, disarmament, and a better world order to succeed in our time.”

The prestigious award comes with a gold medal and 10 million Swedish kronor (over $1.14 million). The money comes from a bequest left by the prize’s creator, Swedish inventor Alfred Nobel, who died in 1895.

On Monday, the Nobel Committee awarded the prize in physiology or medicine to Americans David Julius and Ardem Patapoutian for their discoveries into how the human body perceives temperature and touch.

The Nobel Prize in physics was awarded Tuesday to three scientists whose work found order in seeming disorder, helping to explain and predict complex forces of nature.

Benjamin List and David W.C. MacMillan were named as laureates of the Nobel Prize for chemistry Wednesday for finding an easier and environmentally cleaner way to build molecules that can be used to make compounds, including medicines and pesticides.

On Thursday, the Nobel Prize for literature was awarded to UK-based Tanzanian novelist Abdulrazak Gurnah, whose work puts an emphasis on colonialization and refugees.