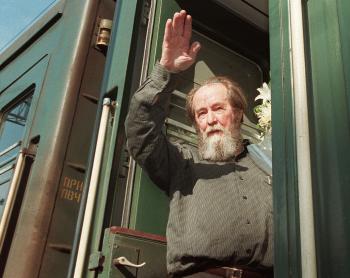 Russian writer Alexander Solzhenitsyn waves as he gets on a train on June 1, 1994 in Vladivostok bound for Khabarovsk. Russian writer and dissident Solzhenitsyn died on August 3, 2008 at the age of 89. (Michael Estafiev/Getty Images)
Europe

Russian writer and historian Alexander Solzhenitsyn, who was expelled from the Soviet Union for his explicit description of life in Soviet labor camps, died of heart failure at the age of 89 late Sunday, the ITAR-TASS news agency reported.

Solzhenitsyn received the Nobel Prize for literature in 1970 after the 1968 publication in the West of First Circle, which was based on his own experiences. In 1945, he was thrown into Stalin's labor camps for alleged anti-Soviet propaganda.

Solzhenitsyn secretly began his work on his most famous work The Gulag Archipelago in 1958. In 1973, the Soviet secret police KGB discovered parts of the manuscript, which Solzhenitsyn then hurriedly had smuggled to the West for publication. As a result, he was expelled from the Soviet Union in 1974.

The Gulag Archipelago was first published in the West in 1973, which described thousands of individual cases and deaths of millions as a result of horrors of the Soviet gulag system and years of Stalinist terror.

With great mastery, he used bitter sarcasm and satire to describe the torturers and executioners, and at the same time, his unique voice was full of admiration depicting the moral courage of the prisoners.

As Solzhenitsyn wrote in The Gulag Archipelago, “It gradually became clear to me that the line between good and evil lies not between states, not between classes, and not between parties, but rather cuts across every human heart.”

Solzhenitsyn, who after his expulsion from the former USSR eventually settled in the United States, returned to Russia in 1994.

Since his return, Solzhenitsyn has been critical of Russia's post-Soviet development, calling for a return to traditional moral values for Russia as well as for the West.

In 2007, he received the highest Russian government award for his work in the humanities—the Russian State Prize.

In a pre-recorded video message, Solzhenitsyn said: “Until the end of my life I can hope that the historical material… collected by me and presented to my readers, enters the consciousness and memory of my fellow countrymen.”

Solzhenitsyn did not attend the awarding ceremony in Moscow's Kremlin in 2007, but his wife Natalya said the writer hoped his study of Russia's history would help the country in the future.

The prize, she said, “gives a certain hope, and Alexander Isayevich (Solzhenitsyn) would be glad if that hope came to life, a hope our country will learn the lesson of its self-destruction in the 20th century and not repeat it.”

In announcing the prize last year, Yury Osipov, president of the Russian Academy of Sciences, called Solzhenitsyn “the author of works without which the history of the 20th century is unthinkable.”