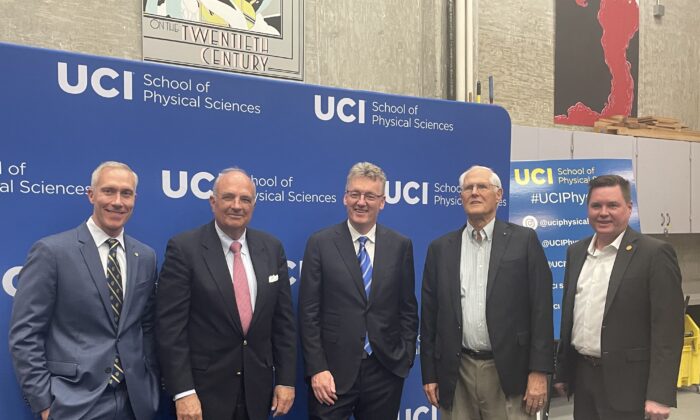 Nobel Laureate, UCI Alumnus on What It’s Like to Win the Prize

IRVINE, Calif.—The 2021 Chemistry Nobel Prize winner and University of California–Irvine alumnus David MacMillan has a lot to say about what it was like to win.

His story—coupled with his massively successful research—made for an evening of riveting recollections laced with laughter and happy tears as he took the stage May 24 at UC Irvine’s Barclay Theatre.

Praised as “making chemistry greener,” few in the audience knew what to expect as MacMillan took the stage under the beaming lights. Many were instantly enthralled as the Scottish speaker took on the role of not just scholar, but expert story-teller and comedian.

“Why is your phone buzzing all the time?” Jean MacMillan, his wife, asked angrily, having been woken up by his mounting phone notifications after he was announced to be the winner that October 6 morning.

Initially ignoring the commotion, MacMillan reluctantly checked to see that the Royal Swedish Academy of Science had texted him, urging his response.

Thinking his “mischievous” friends were playing another practical joke, MacMillan ignored the message and went back to bed.

Still not budging, MacMillan bet List $1,000 that these messages were a prank, feeling guilty the man was now getting “embroiled” in it. The newly-announced Nobel Prize winner then went back to bed.

“I literally went and I fell [back] asleep,” MacMillan recalled as the audience roared with laughter. “I was snoring away. And I didn’t realize that half a world away there were these people trying to get ahold of me.”

It wasn’t until he went downstairs and saw the New York Times announcement on his counter that he began to believe. Depicted at the top was a sketch-like animation of him and his co-researcher.

“I looked at it and I’m like ‘well, that looks like Ben List. Oh my God, who the hell is that?’” MacMillan joked, pointing at his face on the image as the audience cackled.

Having been asked repeatedly what it feels like to win, MacMillan’s answer didn’t disappoint.

“It’s a weird mixture of elation and being somewhat offended,” MacMillan explained as he stared at the cartoon, unraveling the room in laughter yet again.

Having been the first in his family after his brother to attend college, the professor had never even met anyone who had gone. Attending was seen as “lazy” by his parents, at least until they saw his brother’s salary exceed both of theirs combined after he graduated, prompting them to urge MacMillan to attend as well.

One Ph.D. later, MacMillan’s research is credited with revolutionizing the field of organic catalysis, the science of using organic substances to increase the rate of chemical reactions. The process comprises a majority of the world’s production already.

His research is ground-breaking since it allows for far more material production that uses a fraction of the energy it would normally take, paving the way for cheaper, cleaner, and more efficient production in technology, medication, and more. It would also allow new reactions to happen that were previously impossible.

“We need it to make food. We would not have enough food to sustain 8 billion people without this one catalytic process,” MacMillan said.

Furthermore, 90 percent of industrial-scale chemical reactions use catalysis right now, with 35 percent of the world’s GDP relying on catalysis, according to research.

“That number is only going to keep increasing as we move towards more and more sustainable processes,” MacMillan said.

Because research on catalysis is inexpensive, MacMillan’s discovery paves the way for researchers with the “best” ideas—rather than those with the most money—to make further discoveries within catalysis studies since his research can be applied to multitudes of other specialties.

MacMillan began to tear up as he thanked his mentor Larry E. Overman, one of the founding faculty members of chemistry at UCI, as well as the man who helped him apply to the school’s doctoral program.

“I would not be standing here if it weren’t for Larry. He’s an amazing chemist, mentor, and person,” MacMillan said. “I cannot put into words … what you did for me, and I probably never will. Thank you so much.”

MacMillan claims he had “no idea what [he] was doing” when he applied, having written letters to various universities he admired in the hopes he would be accepted. All but UC Irvine rejected him, thanks to Overman’s help in mailing him the application so that he could apply properly.

“He was the only one who responded to me, after 18 rejections,” MacMillan recalled. “He basically said ‘you’re an idiot, here’s the application,’ and it worked!”