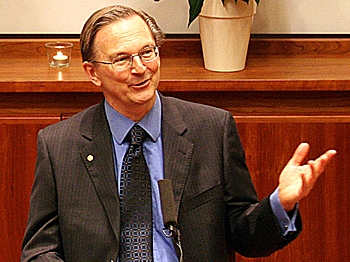 Nobel Laureate in Medicine Encourages the Young to Embark on Science

The trio won the prestigious prize for the solving the mystery of how chromosomes that contains our genes are naturally protected from damage during cell division. A discovery which gives insight into how our body ages and furthers our knowledge about cancer and other diseases.

“For most people the importance is probably the potential for medical advances in the field of aging and cancer,” Jack W. Szostak told The Epoch Times.

Szostak said that science was his passion from a very early age, and he would encourage young people to follow his footsteps.

“You can think of questions about nature and think about how to answer them and one question leads to another, it’s always fun and interesting,” Szostak said.

In the three days leading up to Nobel Prize Award ceremony on December 10, the laureates have a busy schedule of museum and university visits, and dinners and receptions organized by the Nobel committee.

Since 1901, 802 individuals and 20 organizations have been awarded a Nobel Prize. Each prize winner receives a medal, diploma, and a cash award.

Traditionally the Nobel Peace Prize will be awarded in Oslo, Norway, while the other prizes are awarded in Stockholm.