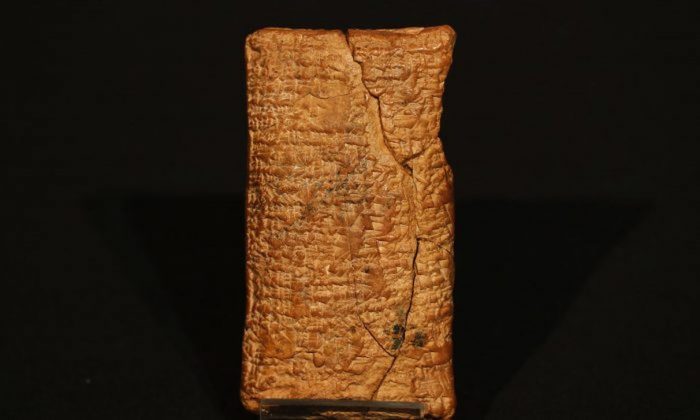 The 4,000 year old clay tablet containing the story of the Ark and the flood stands on display at the British Museum in London during the launch of the book 'The Ark Before Noah' by Irving Finkel, curator in charge of cuneiform clay tablets at the British Museum, Friday, Jan. 24, 2014. The book tells how he decoded the story of the Flood and offers a new understanding of the Old Testament's central narratives and how the flood story entered into it. (AP Photo/Sang Tan)
Trending

Irving Finkel, British Museum curator and author of “The Ark Before Noah,” has found a 4,000-year-old tablet that describes the materials and measurements for building Noah’s Ark.

It also describes the Ark in a way never before conceived by archaeologists—as round.

Finkel writes in a museum blog post of his discovery. Douglas Simmonds had approached him at the museum with a tablet given to him by his father. His father had picked up some artifacts from Egypt and China after the war in the late 1940s.

The tablet “turned out to be one in a million,” said Finkel. Dating from 1750 B.C., it tells the Babylonian “Story of the Flood.” The Babylonian story, and its similarities to the story recounted in the Book of Genesis, were already known, but this table “has startling new contents,” Finkel said.

He lists off some of the materials a God told the Babylonian Noah to use for his ark: “Quantities of palm-fibre rope, wooden ribs and bathfuls of hot bitumen to waterproof the finished vessel … The amount of rope prescribed, stretched out in a line, would reach from London to Edinburgh!”

The ark would have had an area of about 2.2 miles squared (3.6 kilometers squared)—about the size of one and a half football fields—with walls 20 feet high.

The remains of what are thought to be a couple who disappeared in Switzerland in 1942. The remains were found on Tsanfleuron glacier on July 13, 2017, (Courtesy of Glacier 3000)

Conclusive evidence of the existence of Noah’s Ark has eluded ark hunters since time immemorial.

The Bible says the vessel made landfall on the “mountains of Ararat” in Turkey after 150 days in the water.

A group of explorers affiliated with NAMI, a Hong Kong-based evangelical Christian group, said in 2010 that on Mount Ararat, Turkey, they had found traces of the ancient ship.

Their claims, however, met with a stiff challenge from the broader scientific community.

But a California-based ark hunter now believes there is evidence that the vessel and its occupants did indeed come aground on Mount Ararat, the Daily Mail reported.