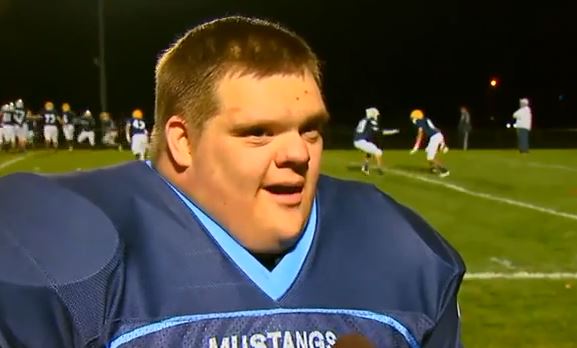 Noah Van Vooren, Senior with Down Syndrome, Runs for Touchdown as Special Gift

Noah Van Vooren, a popular senior with Down syndrome at Wisconsin’s Little Chute High School, got a surprise from his teammates at the end of a recent game.

With the Mustangs, the school’s team, up 62-0 in the fourth quarter, the team brought Van Vooren in for the last play. He jogged on the field, and ran the ball 35 yards into the end zone.

“It was great seeing him out there,” Mustangs senior linebacker Max Keyzers told the Post-Crescent. “He’s always been the motivator for our team. He talks after every game. It was great to hear the crowd chanting and it was great to get him the ball.”

Van Vooren then led the team in singing the school song.

A group of seniors at the school thought that it would be a good idea, so they pitched the play to an assistant coach. Game officials and Clintonville approved, so it was set up.

“A lot of credit for Clintonville for being a class act,” said coach Brian Ryczkowski.

Van Vooren usually serves as a water boy and is known for encouraging the whole team.

“Things like that really bring the school together,” Ryczkowski added. “It lets you know you’ve got good people in the school and the town and they’re doing things right.”