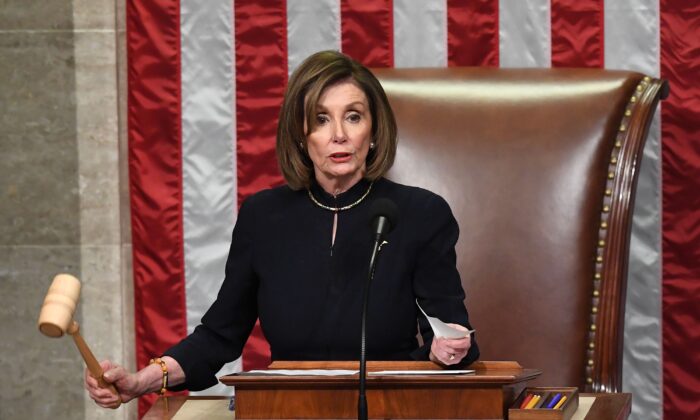 Speaker of the House Nancy Pelosi presides over Resolution 755, Articles of Impeachment Against President Donald Trump as the House votes at the U.S. Capitol in Washington, on Dec. 18, 2019. (Saul Loeb/AFP via Getty Images)
Trump Administration

Harvard Law Professor Noah Feldman, who testified in the House impeachment inquiry several weeks ago, wrote that President Donald Trump hasn’t been impeached yet and issued a warning to some Democrats who are looking to delay sending the two articles of impeachment to the Senate for a trial.

“The Constitution doesn’t say how fast the articles must go to the Senate. Some modest delay is not inconsistent with the Constitution, or how both chambers usually work,” Feldman wrote on Thursday, adding that “an indefinite delay”—an idea that was proposed by some Democrats and not ruled out by Pelosi—”would pose a serious problem.”

If the House doesn’t send the articles, Trump could argue “with strong justification that he was never actually impeached. And that’s probably not the message Congressional Democrats are hoping to send.” The House hasn’t told the Senate yet.

News reports with “Trump impeached” headlines are not exactly accurate, he claimed, saying Trump hasn’t yet been officially impeached.

“So far, the House has voted to impeach (future tense) Trump. He isn’t impeached (past tense) until the articles go to the Senate and the House members deliver the message,” Feldman opined. What’s more, if the House does not send the articles to the Senate, it would deviate from the protocol enshrined in the Constitution.

As for the Senate, he noted that the Constitution says the Senate has the sole power to hold a trial over impeachments.

“We can say with some confidence that only the Senate is empowered to judge the fairness of its own trial,” Feldman remarked.

Another law professor, Laurence Tribe, who suggested in a Washington Post article earlier this week that the House should delay sending the articles, wrote on Twitter that he disagrees with Feldman’s assertions.

Feldman “is making a clever but wholly mistaken point when he says Trump hasn’t ‘really’ been impeached until the Articles reach the Senate. Under Art. I, Sec. 2, Clause 5, he was impeached on Dec 18, 2019. He will forever remain impeached. Period,” he wrote on Twitter. He didn’t elaborate.

Other than Pelosi, Rep. Jim Clyburn (D-S.C.), the House Majority Whip, suggested that the House could delay sending the articles indefinitely.

“The delay is made necessary because the majority leader of the Senate has made it very clear that he’s not going to be impartial, he’s not going to be fair, he will collude, if you please, with the White House—at least the White House’s attorneys—to decide how he will go forward,”  he told CNN. “Why would the speaker of the House step into that without trying to determine exactly what the majority leader plans to do?”

During impeachment inquiry hearings, Feldman testified to the House Judiciary Committee that he believed the president should be impeached.