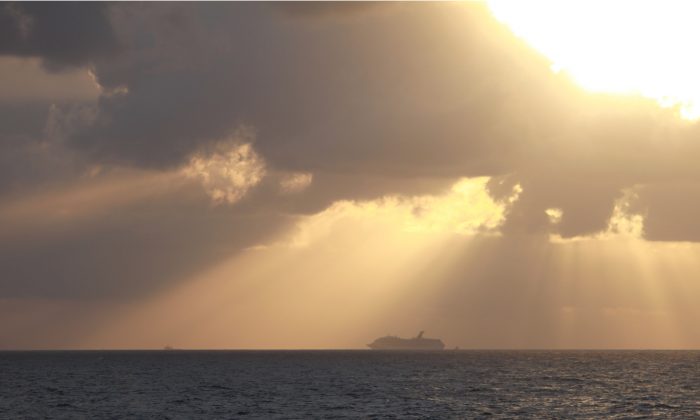 The U.S. National Oceanic and Atmospheric Administration (NOAA) said its scientists are forecasting a “very large” Gulf of Mexico “dead zone” for summer 2019.

It’s so big that its size is about the size of the state of Massachusetts, the agency said.

The “dead zone” is an area of “low to no oxygen that can kill fish and other marine life,” the agency said, adding that this year’s will “be approximately 7,829 square miles.”

The dead zone is caused when excess nutrients are passed down the Mississippi River watershed into the Gulf, officials said on June 10, adding that they then “stimulate an overgrowth of algae, which eventually die, then sink and decompose in the water.”

The low oxygen levels then spawn the so-called dead zone.

“A major factor contributing to the large dead zone this year is the abnormally high amount of spring rainfall in many parts of the Mississippi River watershed, which led to record high river flows and much larger nutrient loading to the Gulf of Mexico,” the NOAA said.

“The models help predict how hypoxia in the Gulf of Mexico is linked to nutrient inputs coming from throughout the Mississippi River Basin,” said Steve Thur, with the NOAA’s National Centers for Coastal Ocean Science.

The NOAA also stressed that nutrient levels distributed into the Gulf of Mexico vary from year to year due to the natural swings in precipitation and river discharge.

“This year’s historic and sustained river flows will test the accuracy of these models in extreme conditions, which are likely to occur more frequently in the future according to the latest National Climate Assessment. The assessment predicts an increase in the frequency of very heavy precipitation events in the Midwest, Great Plains, and Southeast regions, which would impact nutrient input to the northern Gulf of Mexico and the size of the hypoxic zone,” Thur said.

Several weeks ago, NOAA said the coming Atlantic hurricane season will be around normal, with four to eight hurricanes.

The agency released its official forecast on May 23, about a week ahead of the official June 1 start to the season, which lasts until November.

The agency said it has a 70 percent confidence of its seasonal forecast.

This week, the first named storm, Andrea, formed hundreds of miles east of Florida and the Carolinas before dissipating.