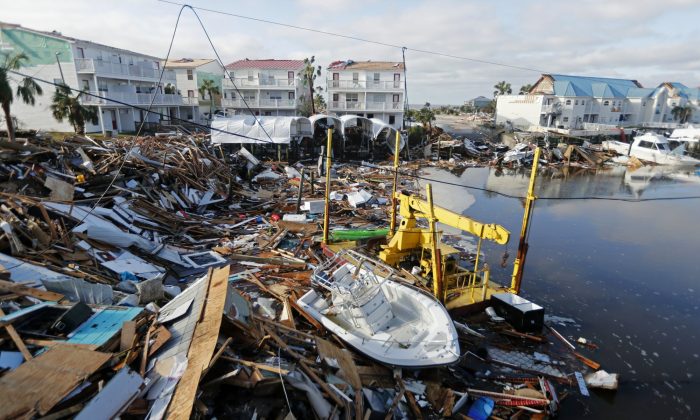 In this file photo, a boat sits amidst debris in the aftermath of Hurricane Michael in Mexico Beach, Fla. on Oct. 11, 2018. Weather forecasters have posthumously upgraded last fall's Hurricane Michael from a Category 4 storm to a Category 5. (Gerald Herbert/AP Photo, File)
US News

NOAA: Up to 4 Major Hurricanes Could Form During 2019 Atlantic Season

The U.S. National Oceanic and Atmospheric Administration (NOAA) said the coming Atlantic hurricane season will be around normal, with four to eight hurricanes.

The agency released its official forecast on May 23, about a week ahead of the official June 1 start to the season, which lasts until November.

The agency said it has a 70 percent confidence of its seasonal forecast.

This week, the first named storm, Andrea, formed hundreds of miles east of Florida and the Carolinas before dissipating.

“Preparing ahead of a disaster is the responsibility of all levels of government, the private sector, and the public,” said Daniel Kaniewski with FEMA.

He elaborated: “It only takes one event to devastate a community so now is the time to prepare. Do you have cash on hand? Do you have adequate insurance, including flood insurance? Does your family have communication and evacuation plans? Stay tuned to your local news and download the FEMA app to get alerts, and make sure you heed any warnings issued by local officials.”

AccuWeather recently released its forecast for the 2019 hurricane season, predicting 12 to 14 named storms.

Looking at recent weather patterns, 2019 could be similar to 1969, when Hurricane Camille pummeled the Gulf coastline. It made landfall in Waveland, Mississippi, and left widespread damage in several coastal areas, including Mobile, Alabama, AccuWeather reported. “It became one of only three Category 5 hurricanes on record to impact the U.S,” the report said.

The Weather Channel, meanwhile, posted its own forecast, saying there will likely be 14 named storms, seven hurricanes, and three major hurricanes for the 2019 seasons.

It noted that this season is expected to be slightly above the yearly average of 12 named storms, six hurricanes, and three major hurricanes.

“There is no strong correlation between the number of storms or hurricanes and United States landfalls in any given season. One or more of the 14 named storms predicted to develop this season could hit the U.S., or none could at all. That’s why residents of the coastal United States should prepare each year no matter the forecast,” the outlet wrote.

Highlighting the unpredictability of the storms, “The 1992 season produced only six named storms and one subtropical storm. However, one of those named storms was Hurricane Andrew, which devastated South Florida as a Category 5 hurricane,” the channel noted.