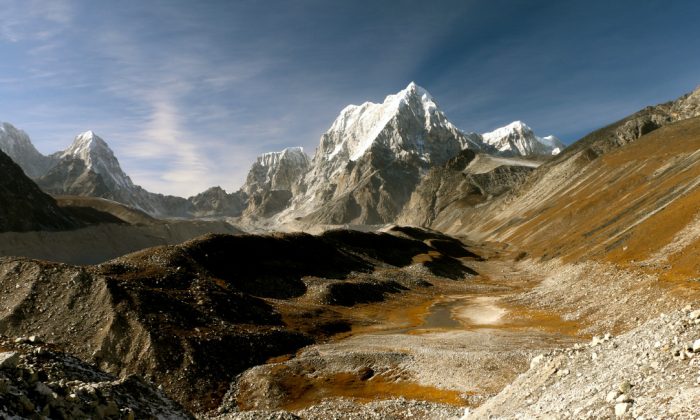 No one to help you here: The Himalayan wilderness looms over the way to the Nangpa La. (Nolan Peterson/The Daily Signal)
Asia & Pacific

NAMCHE BAZAR, Nepal—There are a lot of ways to die on the Nangpa La. For one, the altitude can kill you.

This is what Tibetan refugees face as they flee China’s oppression: At more than 19,000 feet (roughly the same height as Mount Kilimanjaro in Africa) this mountain pass, which bridges the Himalayas between Nepal and Tibet, is high enough to cause cerebral and pulmonary edema, when the brain or lungs fill with fluid because of oxygen deficiency.

Both types of edema are quite sudden and deadly physiological reactions to the sparseness of oxygen at high altitude. The only cure—and chance for survival—is to descend to lower elevations and thicker air, quickly.

Headaches, breathlessness, and nausea are common at this altitude. But when one is alone in the remote Himalayas, far removed from the possibility of evacuation (or if you are a Tibetan refugee covertly fleeing across the Nangpa La), every symptom spurs the fear that it could be the beginning stages of a fatal reaction to the thin air.

And if so, your fate is in your own hands. There is no one to help you here. The line between survival and death is a thin one in this place.

The vertigo-inducing terrain is also dangerous. The trail cuts across rumbling glaciers, lacerated with deep crevasses hidden beneath thin sheets of snow. On the approach marches on either side of the pass, the Himalayan landscape is steep, covered in loose stones and crumbling rocks prone to landslides. The sides of the trail are littered with the bones of unfortunate yaks that have fallen to their deaths.

Add to this the ever-present risk that a storm could blow through the Himalayas, sending the temperature double digits below zero (in both Fahrenheit and Celsius).

Fingers and toes go first, succumbing to frostbite. Then, if you aren’t wearing the right cold-weather clothes, you slowly die from hypothermia. It’s supposed to be a peaceful death, though. Bodies of mountaineers on peaks such as nearby Mount Everest are sometimes found half-clothed, evidence of the sensation of overwhelming heat one feels in the final throes of freezing to death.

Pasang Nuru Sherpa, a 64-year-old Tibetan refugee, was caught in such a storm while crossing the Nangpa La in January 1975. He was 23, and the snow was up to his chest, trapping him above 19,000 feet in temperatures 30 degrees below zero Celsius.

Nuru was a nomadic trader from the Tibetan town of Tingri. By 1975 he already had crossed the Nangpa La, an ancient trade route dating back to the days of the Silk Road, several times to deliver meat and yak wool blankets to the Sherpa village of Namche Bazar in Nepal’s Khumbu region, home to Mount Everest.

But this trip was different. Nuru was planning on leaving Tibet for good, seeking a new life inside Nepal free from communist oppression. He had lived through the 1959 uprising and the hell of China’s Cultural Revolution inside Tibet. Of the 6,000 Buddhist monasteries in Tibet before 1959, only 370 survived until the next year.

Nuru had had enough. As a trader, he had been back and forth to Nepal. His eyes were open to what life was like outside the Orwell-esque police state that Tibet had become since the 1950 Chinese invasion.

His eyes were open to what life was like outside the Orwell-esque police state that Tibet had become since the 1950 Chinese invasion.

Nuru wanted out. But the storm on the Nangpa La threatened to end that new life before it had a chance to begin.

“The weather is very dangerous on the Nangpa La,” Nuru says over masala chai tea in his home in Thame Teng, a Nepali village 12,887 feet high in the Bhote Khoshi River valley and a four-day trek from the Nangpa La.

“I had to sleep on the pass,” he explains, rubbing together the ruined remnants of his hands. “I hadn’t eaten for a week, and I was very, very cold. I thought I was going to die.”

Nuru survived the storm, but he spent the next year in and out of hospitals. He lost all his fingers and toes to frostbite. Handicapped and unable to continue his livelihood as a trader, he later defied his injuries by discovering his talent as an artist. He is now a renowned painter and makes a living selling depictions of Himalayan landscapes and local monasteries to trekkers and mountain climbers.

The Nangpa La is a dangerous place. Yet tens of thousands of Tibetans like Nuru have braved the deadly cold, altitude, and terrain of the Himalayas for a chance to escape China and live as refugees in India and Nepal.

The dangers of the Nangpa La are not limited to the natural ones. Chinese border patrols lurk on the Tibetan side, poised in fortified posts, ready to shoot anyone illegally crossing the pass. Since 2009, the Chinese dragnet on the border has become so tight that it accomplished what the Himalayas had been unable to for more than half a century—convince Tibetan refugees that it was too dangerous to attempt escape.

The Nangpa La has always been dangerous, but the Chinese soldiers are there now, and they’ll shoot you for trying to cross.
— Pasang Nuru, Tibetan refugee in Nepal

“There’s been no Tibetans coming across the pass for more than four years,” Nuru says. “The Nangpa La has always been dangerous, but the Chinese soldiers are there now, and they’ll shoot you for trying to cross.”

He adds: “It’s not worth it anymore.”

For two weeks in November, this reporter followed the path of Tibetan refugees, retracing their journey in reverse by hiking solo through the Nepal Himalayas to the Nangpa La. It was a long, tough walk, beyond the last tentacles of civilization and outside the normal trekker circuit of teahouses and mountain lodges.

I began with a 30-minute flight from Kathmandu to Lukla, a 9,317-foot-high village with an airstrip cut into a mountain and the starting point for treks to Mount Everest base camp. The arrival into Lukla was slightly terrifying, even for a former Air Force pilot. The approach weaves through nail-biting mountain passes, with Himalayan giants such as Everest looming 20,000 feet above. Airplanes land on a steep, short runway that abruptly ends in a mountain wall thousands of feet high.

There’s no chance of a go-around after a botched landing; you get only one chance to do it right, or you’re flying into a mountain. On takeoff, the departure end of the runway is a sheer cliff. Once past the point of no return, you’re either taking off or going over. Welcome to the Himalayas.

After safely arriving in Lukla, I trekked up the Dudh Khoshi River valley to the de facto capital of Nepal’s Sherpa region, Namche Bazar, perched at 11,286 feet in a stunning mountain bowl under the shadow of Mount Everest.

This is a popular stopover for trekkers and mountaineers to take a rest day and acclimate to the altitude. You can spend idle time shopping in the numerous Tibetan craft stores and knock-off mountaineering shops. (A $10 North Face down jacket—what a deal!) You also can eat a yak burger or have a beer at the local Irish pub, which shows nightly screenings of the IMAX movie “Everest.”

After Namche Bazar, however, I deviated from the typical trekker route. Instead of following the colorfully Gore-Texed flocks heading northeast toward Mount Everest, I turned west and traveled up the less-visited Bhote Khoshi River valley.

As I went farther and climbed higher, the alpine forests thinned into meadows and shrub land. I first stopped in 12,467-foot-high Thame, a village known for its spectacular Buddhist monastery perched on a ridgeline hundreds of feet above. The monastery and much of the village itself were leveled in a magnitude 7.3 earthquake in May, the second of two massive earthquakes to hit Nepal in 2015. In Thame, I met an international group that was rebuilding the village’s lone school.

Italian mountaineer Lorenzo Gariano, 58, headed the effort. Gariano has been visiting Nepal since 2001. Initially lured by the appeal of high-profile peaks like Everest, he says he developed an affinity for the Buddhist culture of the Sherpa people. He has been coming back every year to spearhead development projects. This year, however, the emphasis was on earthquake reconstruction.

“Luckily, the teachers told me, the children at midday were all in the courtyard playing and they literally saw two of the buildings collapse right in front of them,” Gariano said, adding:

“They were so lucky that they weren’t inside. They certainly suffered a lot of damages here in Thame. But it’s wonderful that after five or six months there’s so much rebuilding going on. I expected to find far more devastation.”

Gariano told me how the region had changed since China closed the Nangpa La. Not only had the flow of refugees ended, he explained, but so had travel on a centuries-old trade route between Tibet and Nepal that until 2009 was a linchpin of the area’s economy. Gariano said:

“Ask any person, any Sherpa in the area, and they’ll tell you the area has suffered badly because the trade is gone and prices are higher on just about everything. All goods now have to come from lower down the valley or [be] flown in, whereas for centuries there was a circular trade with Tibet bringing goods. Not for nothing, Namche Bazar means ‘market.'”

After Thame, I made a brief stop to visit Nuru at his home in neighboring Thame Teng, then pressed on in the direction of the Nangpa La. The arid Bhote Khoshi River valley opened up with the miles to reveal more and more of the high, snow-capped peaks lining the border with Tibet to the north.

I encountered hardly any other trekkers, but I walked past a procession of Buddhist chortens and stupas, some hundreds of years old and many in ruins from the earthquakes.

The tiny settlement of Arya, about 14,000 feet high, was the last outpost before the wild Himalayas. From there, it was another 11 miles to walk and another 3,000 feet to climb to reach the foot of the Nangpa La. After Arya, I didn’t see another human being for four days.