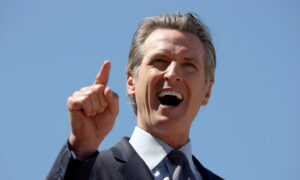 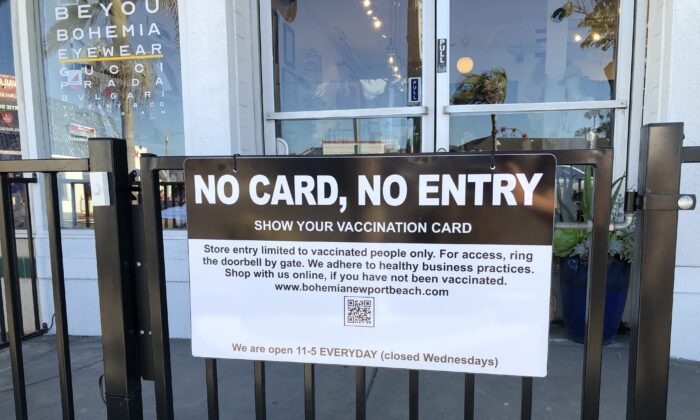 Deborah Nguyen, owner of Bohemia in Newport Beach, began requiring shoppers to show proof of vaccination at her shop more than a month ago. (Vanessa Serna/The Epoch Times)
Southern California

No Vaccine, No Service: California Boutique Puts Vaccine Verification System to Use

California recently rolled out a digital vaccine verification system to simplify the proof-of-inoculation process—and at least one Orange County business is putting the system to use.

Deborah Nguyen, owner of Bohemia in Newport Beach, began requiring shoppers to show proof of vaccination before entering her shop more than a month ago.

“I did this [so that] I can protect all of them,” Nguyen said. “I said, ‘You know what, I’m just going to bite the bullet and I’m going to lose half the business.’”

Nguyen told The Epoch Times that she decided to require vaccination proof after a year of constantly having to shut down for potential COVID-19 virus outbreaks within her store and personal life.

Last year, she transitioned from public shopping to appointment-only sales after her customers began feeling uncomfortable, she said.

In January—around the height of the COVID-19 outbreak in Orange County—Nguyen shut down her business completely until the vaccines became more accessible. When she reopened a few months later, she said people weren’t complying with the store’s mask and sanitation policies.

This led Nguyen to put a sign outside the door that said “proof of vaccination required.”

“My people don’t feel safe … and if somebody gets somebody sick down in the community, it’s going to come right back at me,” she said. “I got them sick, somebody dies on my shift. Imagine, how would you sleep? How do you wake up in the morning because you just killed somebody and you were asymptomatic? That’s my biggest concern.”

Nguyen quickly received negative feedback from the public both in person and online. Some people have responded to her vaccine verification policy by leaving “hateful” comments and messages on her social media pages, she said.

The Newport Beach boutique owner said she feared for her safety, as residents have threatened to protest around her shop.

Nguyen said that those responding negatively to her policy are not clients that have shopped in her store. Legitimate customers have been excited to see the store reopen, she said.

The state’s digital vaccine verification system has been a contentious issue for Californians.

He shared his concerns more than a week after the state’s June 15 reopening and release of a digital vaccine card. California Department of Technology spokesperson Amy Norris told The Epoch Times that the tool was introduced as a more convenient way for residents to show proof of inoculation.

Gov. Gavin Newsom said, in announcing the release, “We’re not going to mandate passports, but businesses can require verification.”

Although the digital verification cards aren’t required currently, Moorlach compared them to authoritarian measures seen during World War II and Nazi occupation, when people had to carry papers and an identification card.

“It creates confusion, and it creates distress, and it’s very disruptive,” he said. “The governor is treading on very emotional ground to many of us that are a little older and have a lot of memories of what was done by other countries. A lot of immigrants are trying to figure out what’s going on here in this country—[they] thought they left that kind of stuff [behind].”

With the state reopening, some businesses are requiring vaccine verification to enter and receive service. While some residents told The Epoch Times that they don’t mind sharing their vaccination status, others said doing so would be an infringement of their privacy.

Federal laws don’t prohibit businesses from asking customers and employees about their vaccination status, a lawyer told The Associated Press.

“The Fourth Amendment only applies to government searches and seizures and certainty not to businesses asking for proof of vaccination,” Georgetown University law professor Lawrence Gostin told the news wire service.

“Individuals who wish to provide proof of vaccination can use the digital record, the paper CDC card, or self-attestation,” she said.