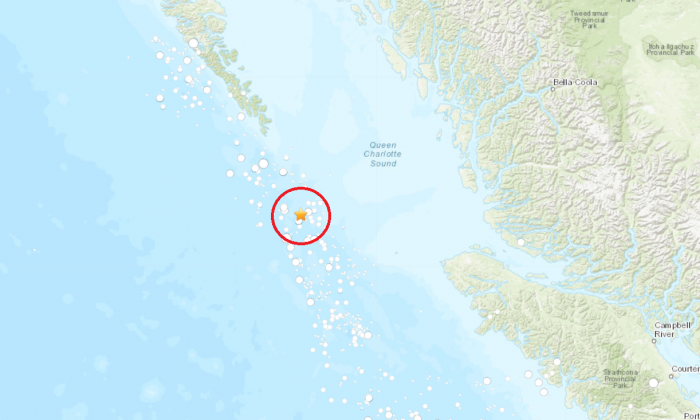 No Tsunami or Damage Reported After Multiple Tremors Recorded Off B.C.

VANCOUVER—A series of earthquakes off British Columbia’s coast on Friday may be linked to a stronger quake in the same area earlier in the week, experts say.

Alison Bird, a seismologist with the Pacific Geoscience Centre near Victoria, said they are working to determine if the latest tremors are aftershocks from Wednesday’s 6.2 magnitude quake in the same region.

“I’m starting to wonder if this might be more of a swarm sequence than a main shock, aftershock sequence,” she said.

A swarm sequence is a outbreak of seismic activity, which Bird said is common off the B.C. coast.

“It often has a sudden flurry of activity where you get 100 earthquakes within a week-and-a-half period,” she said. “They’re a bit of a nuisance.”

The quakes occurred under the Pacific Ocean between Haida Gwaii and the northern tip of Vancouver Island.

Bird said she had calculated two larger tremors, one occurring at 5:58 a.m. Pacific time Friday, with a preliminary magnitude of 5.1 and a second four minutes later measuring 4.7.

None set off a tsunami and no damage or injuries were reported.

The U.S. Geological Survey initially set the magnitude of the most significant tremor at 5.6, but Bird said different interpretations are common in the first hours after a quake as seismologists work to hone the information.

Three plates of the earth’s crust meet off the west coast of Vancouver Island, creating an extremely active seismic region as the Juan de Fuca and Pacific plates slip under the North American plate.

Data showed the latest quakes were all centred near the northern tip of the Juan de Fuca plate where it meets the other two plates, and were shallow, ranging from five to 10 kilometres below the surface.

There have been dozens of tremors in the same general region since the Wednesday evening earthquake, said Bird.

“When it’s this busy we only locate the large ones into our data base and then we deal with the smaller ones later on,” she said.

“It is a very good reminder that we are living in a very seismically active area and there will be larger earthquakes and they will be closer to us and they will cause damage,” said Bird.

“I really encourage people to be prepared.”

Southern California experienced a 6.4 earthquake on Thursday, causing damage and some injuries. Bird says the B.C. quakes and California’s quake are unconnected and didn’t occur in the same fault zone.