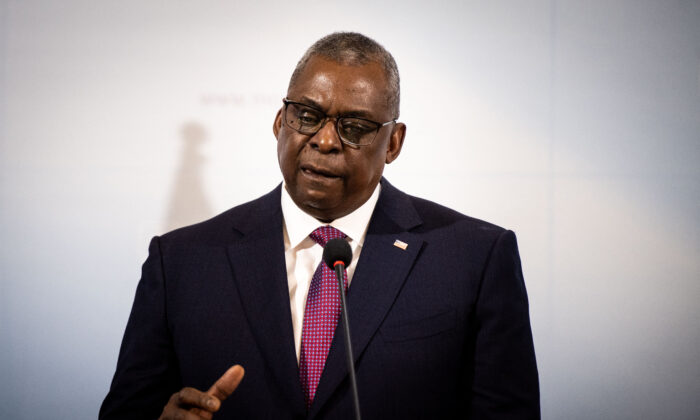 The U.S. Department of Defense said Thursday that a NATO-enforced no-fly zone would do little to prevent some of Russia’s strikes inside Ukraine, coming after some members of Congress suggested the measure.

“The systems that are being used by the Russians to engage Ukrainian forces currently–they’re using a lot of rockets and missiles and artillery,” Pentagon chief Lloyd Austin told reporters. “There are a number of things that can be used to counter that.”

But Austin said Russian forces have been using cruise missiles that are being launched from within Russia’s borders.

“So a no-fly zone would not have prevented that activity,” Austin told reporters while speaking at a news conference with Slovak Defense Minister Jaroslav Nad in Bratislava, Slovakia.

President Joe Biden “was clear, we would not have U.S. forces fighting in Ukraine,” he added. “No-fly zone means you are in combat with Russia, our president said we are not getting into a fight with Russia.”

“So what this really means is that in order to control the skies, you have to shut down the air defenses there on the ground,” Austin elaborated. “And some of those air defense systems are in Russia and so, again, there’s no easy or simple way to do this. There’s no such thing as a no-fly zone lite. A no-fly zone means you’re in a conflict with Russia. So from a U.S. perspective, we’re, again, our position remains that we’re not going to do that,” he added.

Since the start of the invasion on Feb. 24, Ukrainian President Volodymyr Zelensky has frequently called for the United States and NATO to implement a no-fly zone over Ukraine. During a speech to Congress, Zelensky called on lawmakers to “close the skies,” meaning they should establish a no-fly zone over his country.

Previously, NATO officials said that a no-fly zone would spread the conflict outside Ukraine and potentially start a world war with Russia.

Rather than use a no-fly zone, U.S. officials have instead opted to send weapons and ammunition to Ukraine. Biden said earlier this week that his administration would provide Kyiv with 3,000 shoulder-launched surface-to-air missiles that include about 800 Stinger anti-aircraft missiles and 2,000 Javelin missiles that have been reportedly highly effective against Russian armored vehicles.

Ukraine has also asked for MiG-29 fighter jets, S-300 anti-aircraft missiles, and other systems instead of a no-fly zone. Slovakia reportedly possesses Soviet-era S-300s, and Nad told reporters that his government is looking into sending weapons to Ukraine.

Should Slovakia send the missile systems to Ukraine, Nad suggested that the defensive system would likely need to be replaced by the United States. Slovakia, which used to be the eastern half of former Czechoslovakia, is a former Warsaw Pact nation that shares a small border with Ukraine.

“We’re willing to do so immediately when we have a proper replacement,” Nad said, adding that the S-300 systems are its “only strategic air defense system.”

“So what would happen immediately when we decided to give it to Ukrainians is that we actually create a gap, a security gap, in NATO,” he added.