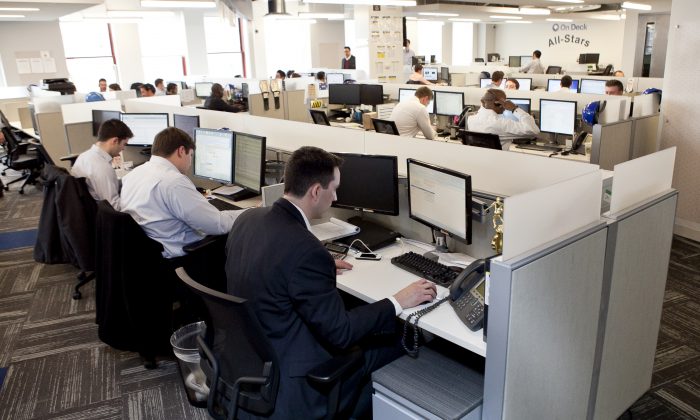 No Space for Tech Companies in Brooklyn

NEW YORK—As the tech industry in New York City grows, it is not a lack of willing participants or venture capital, nor NYC’s painfully slow Internet connections that prohibit growth, it’s the lack of real estate, especially in tech’s lesser-known hotspot of Brooklyn.

The Brooklyn Navy Yards, home to rare manufacturing space inside the five boroughs, has a waiting list of 150 tenants. Creative space in Dumbo has all but disappeared, according to Tucker Reed, president of the Downtown Brooklyn Partnership.

“Despite the presence of a considerable number of commercial buildings in downtown Brooklyn, longer term leases have tied up much of the current space over the next five years,” Reed said at an Association for a Better New York (ABNY)-sponsored breakfast on June 18.

Related article: Is your city preparing for climate change?

Brooklyn’s Tech Triangle has increasingly emerged as not just an alternative to scarce space in Manhattan, but also as a first choice for tech companies due to the fact that much of the tech sector’s talent already lives in Brooklyn.

“Five years ago, it was more important to have a Manhattan address. Now the Brooklyn address is even more powerful for companies who are on the cutting edge,” said Markman. “It is all about the buzz, building the brand, and creating an environment for people to work in that is special. Brooklyn certainly has that now.”

Reed’s organization, in partnership with the Dumbo Improvement District and the Brooklyn Navy Yard Development Corporation, issued a study offering solutions to the space crunch.

The coalition suggested freeing up space at existing underutilized spaces in Brooklyn, including the Watchtower on Sands Street, municipally owned buildings in downtown Brooklyn, and unused spaces on Fulton Street.

According to the coalition, the space is there, and all that is missing are the incentives to develop it. According to the report, some landlords are waiting to rehabilitate buildings for the residential market where they could yield three times the sale price of an underutilized space.

The plan calls for a grant for subsidized landlords to create open spaces with natural light, which is inviting to tech companies.

Short Leases
Pumping the maximum amount of money back into the business, rather than paying a premium for real estate, is the preference of many tech startups. Tech companies are typically looking for shorter leases, hoping their businesses will flourish and they will outgrow their spaces.

Markman said he sees the problem all the time, with some companies getting into a lease negotiation for a space, only to grow by 50 employees during the negotiation and need more.

The trend toward shorter leases has been great for tech companies’ pocketbooks, but landlords used to signing tenants in at 10- or 15-year leases, are not as pleased.

With a blessing from the Bloomberg administration, the coalition created a Master Lessee Program, which will allow a larger company to hold a long-term lease, and sub lease two-or three-year leases to smaller companies.

This would guarantee the landlord gets a credit worthy tenant on the contract—which is often lacking with tech startups.

Even without this program, Markman said some landlords are already realizing the changing marketplace and allowing shorter leases to avoid being left out of a growing industry.

“If they [owners and landlords] want to play in the space with these types of companies, they have to accept different ways of dealing with them: shorter terms and lower security deposits,” Markman said. “If owners or landlords are not comfortable playing in that space, you move on to someone that wants to deal with them.”

Markman said finding lessors who want to negotiate shorter term leases has been much easier in the last few years as the industry has blossomed and the demand for commercial space in the financial sector has dwindled.

Subsidy for Growth
The impact of the growing tech industry on the real estate market has been substantial. The tech sector had the most leasing activity of all sectors in New York City in 2012, encompassing 25 percent of total square feet leased in the city.

The coalition’s suggestions would certainly cater to the needs of the tech industry, however, it would also bring much more secure investments to real estate development companies who would only pay a portion of the cost for building repair, with the rest coming from subsidies.

Nicole Gelinas, senior fellow at the Manhattan Institute, a nonpartisan think tank, said subsidizing real estate felt like a step too far, although she supports some of the other initiatives suggested by the coalition, such as extending bus service, adding ferry landings, and more bike lanes to the area.

“They keep using subsidies to keep the price artificially cheap at the same time a lot of people want to go there and work,” Gelinas said. She pointed to the Brooklyn Navy Yards as a prime example. “You could have no waiting list and much higher prices.”

“It is hard to say we should rent to one in industry at an artificially low price,” Gelinas added.