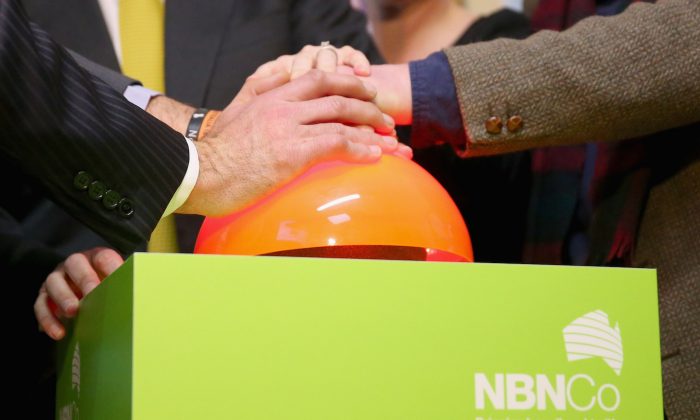 A detail of hands on the button pushed by Anthony Albanese, former deputy prime minister of Australia, to switch on the National Broadband Network (NBN) fibre network to an additional 2600 homes and businesses in Brunswick on July 24, 2013 in Melbourne, Australia. Analysts say the NBN plan is critical to ensuring faster broadband speeds into the future, as Australia falls behind countries like South Korea and the US. (Scott Barbour/Getty Images)
Australia

SYDNEY – Australia’s National Broadband Network (NBN) may well become the largest single infrastructure investment in Australia’s history. But analysts fear that under changes being considered by the new Coalition government, Australian tax payers may end up paying more to get what they will ultimately need.

The slower take-up will leave Australia struggling to compete in the wake of countries with faster, more advanced and more accessible internet services.

“We are going to fall further and further behind,” said Dr Matthew Sorell, senior lecturer in the school of Electrical and Electronic Engineering at the University of Adelaide.

Dr Sorell believes that while there were legitimate criticisms of Labor’s management of the NBN roll out, the previous government had the fundamentals right.

“You may not like how they [Labor] were managing it, but they certainly got why they were there,” he said in a phone interview.

A review conducted in part by NBN Co under new chairman Ziggy Switkowski was released in December 2013. It criticised Labor’s mandated technology of Fiber to the Premises (FttP) saying it would take an extra three years to roll-out and would cost $72.6 billion in capital expenditure, $29 billion more than estimated.

“The original corporate plan underestimated the costs, overestimated what are the real world experiences of revenues and what households are prepared to pay,” Mr Switkowski said.

The review makes recommendations in line with the Coalition’s plan to use a “multi-technology mix” (MTM), combining optical fibre to the node (FttN), existing copper wires and hybrid fibre-coaxial (HFC) cables for delivery to premises in cities and suburbs.

The review estimates that costs would be reduced by around $30 billion and would deliver 90 per cent of customers a speed of at least 50 megabits per second (MBps) by 2019, rather than 57 per cent as was originally estimated.

Dr Sorell says people expect to run multiple computers and notebooks with much more upload and download demands now, let alone in the future. Copper wiring, he says, just cannot handle the sort of demands expected, and trying to cut corners will only cost the Australian tax payer more in the long run.

“Optical fibre is the only known viable technology beyond 2025. The only justification for considering anything else in the meantime is to buy us time,” he said.

The world is rapidly moving online for everything from health and education to commerce and manufacturing. Countries like Korea and Singapore embraced the technology for faster internet speeds a decade ago and the United States is already acting to gain faster reliable internet.

“I have never met anyone who has told me their internet connection is too fast,” said Milo Medin, head of Google Fiber at a Fiber to the Home (FttH) Forum in Kansas City last year. Google has become a service provider, offering one gigabit per second – or 1000 MBps – in Kansas City first, before moving on to other selected US cities.

Mr Medin compared present internet speeds of between 8 MBps and 100 MBps to the earlier dial-up internet connection, noting that users moved on from that pretty fast.

“Speed empowers you to do things that would be impossible or impractical without it,” he said.

“Cities and countries that have this kind of speed will enjoy the benefits of economic, academic and community growth,” Mr Medin predicted.

Demand for faster internet speed is growing exponentially in Australia, as is e-commerce. In a report to Telstra Corporation Ltd, Access Economics (2009) estimated that the net impact of introducing the NBN could contribute as much as $9.5 billion to Australia’s gross domestic product (GDP) between 2008 and 2020.

The report suggested that the NBN could potentially have the single biggest impact on the economy of any government investment in the last two decades.

Analysts say the NBN has paid the price of becoming a political football. The previous Labor Government had raised expectations too high, setting themselves up for criticism when they could not meet connection numbers.

Under the previous NBN board though, much needed time was spent on planning and detailing the roll-out. The Coalition, having criticised Labor’s plan so vigorously, is compelled to put forward a new strategy but that brings planning across many areas back to square one again.

Paul Budde, an international telecommunications analyst based in Australia, cites the design of some 60,000 street cabinets for the fiber to the node (FttN) installation as an example.

“As yet there is no FttN cabinet design for the Australian environment; nor are cooling, space and fire issues fully under control. Certainly many issues will need to be addressed basically on the run,” he wrote on his blog.

He says the combined mix of technologies could also become a logistical nightmare.

“Just think about how to design such a network – street by street, house by house – and what would be involved in getting the design right. So again design and developments will take place on the go, as the quality of significant parts of the infrastructure will only become clear once work is commenced,” he wrote.

Mr Budde and Dr Sorell say fiber to the premises (FttP) will accommodate all predicted needs for at least 25 to 50 years. They argue that households will ultimately have to upgrade to FttP anyway and, with that delay will come greater costs.