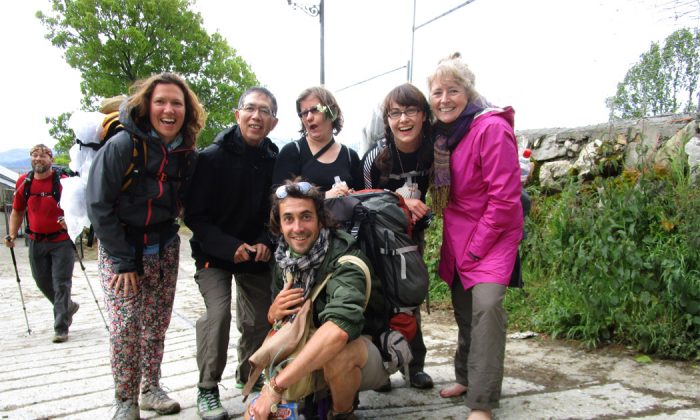 Sue Kenney (R) poses with a group of walkers on the Camino de Santiago, a medieval pilgrimage route in Spain. A proponent of the barefoot or “earthing” movement, Kenney leads regular guided tours along the Camino while barefoot. (Courtesy Sue Kenney)
Canada

No Shoes? No Problem

If you run into Sue Kenney on the street, chances are she won’t be wearing any shoes.

Kenney is a proponent of the barefoot or “earthing” movement, which holds that walking barefoot regularly facilitates health and well-being. It is based on the idea that the earth has energy and nutrients that have a healing effect when in direct contact with the body.

Although some in the medical establishment dismiss earthing as nothing more than a placebo effect or simply nonsense, practitioners swear by it.

One day about three years ago, Kenney, who hails from Orillia, Ont., felt an invigorating rush of energy while walking barefoot, so she continued doing it. She then discovered books by barefoot proponents and experts such as Clinton Ober and Christopher McDougall, and was hooked.

Within a few months of going barefoot regularly her posture and balance improved, stiffness and inflammation in her body disappeared, and her feet became much stronger. Her allergies to dogs and cats, which she had suffered with for nearly four decades, virtually disappeared.

“I call it barefoot healing, because our feet don’t actually heal us, it’s just what happens when we go barefoot—it opens our sensory receptors and creates this incredible sense of self-awareness,” says Kenney.

Kenney came upon the barefoot movement by accident. For over 20 years she had been juggling the responsibilities of a busy account executive, raising three daughters as a single mother, and rowing competitively as an award-winning master rower.

But when she was abruptly downsized from her corporate career she took stock of her life and realized it was time to slow down. She subsequently embarked on a long, solitary walk—the 780-kilometre Camino de Santiago, a medieval pilgrimage route in Spain.

“I walked almost 800 kilometres. It profoundly changed my life. I slowed down, and basically said I would never ever run again in my life—I just wanted to slow everything down,” she says.

She now leads regular guided tours along the Camino (while barefoot) and often gives inspirational talks about her experience. She has written a series of books about her journey, one of which is currently being made into a feature film.

She also designed “barebottom shoes,” which she sells to bare-footers who want to maintain the socially acceptable illusion of footwear without having an actual sole—an idea she pitched on Dragon’s Den earlier this year.

Critics of the earthing movement say there is a lack of solid research on its benefits, which rely too heavily on anecdotal evidence. Physicians have raised concerns about the possibility of picking up bacteria, fungal infections or viruses as a result of going barefoot—not to mention the potential for stepping on sharp objects.

After hearing the buzz about earthing, well-known doctor, author, and speaker John Briffa decided to try it for himself. He was initially skeptical, but after going barefoot for brief intervals over just a few days he was shocked to find an old ankle injury cleared up, as did an ingrown toenail.

Though he admits this could have been a placebo effect, he found that another injury in his elbow was not cured, decreasing the likelihood that his experience could be explained by placebo alone.

“My earthing experiment started with me sitting with my bare feet on damp grass on 14th April. I lasted 20 minutes. Later in the day I noticed that the pain in my left foot and ankle had disappeared completely (and they have not returned since),” he wrote on his website.

“While my ankle and foot pain (and ingrowing toenail) resolved, my elbow pain did not. This does not in any way disprove my foot/ankle improvement was not a placebo response, but the likelihood of it being placebo is diminished by the experience with my elbow I think.”

There is also a barefoot running movement. While controversial in some medical circles, proponents say running without shoes or with minimal footwear protects them against injury because it corrects their form and strengthens the feet.

The movement has grown in popularity in the last half-century, publicized by authors, marathoners, and Olympians who themselves run barefoot. The Barefoot Runners Society has thousands of members around the world including a Canadian chapter, whose runners have been known to brave even the most frigid winter months.

Kenney says going barefoot has ultimately taught her gratitude and respect for nature, while helping to cultivate patience and self-awareness.

“I think it’s that primal need to be connected not only to ourselves, but to be connected to the world as one—to have a universal connection, and a connection with nature. All of that comes out of barefooting.”