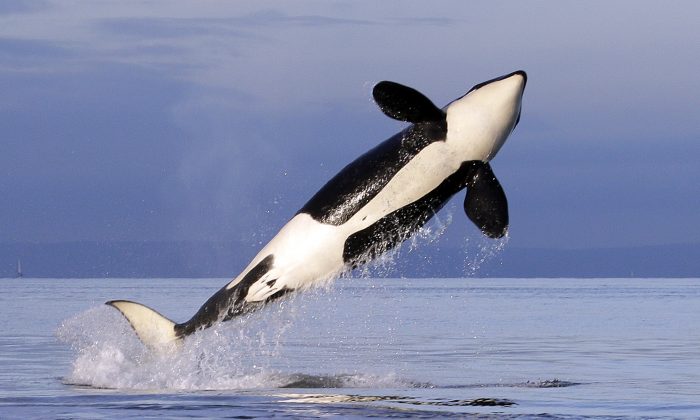 A female orca leaps from the water in a Jan. 18, 2014 file photo. (Elaine Thompson/File Photo via AP)
Social Media

After SeaWorld announced it would end its killer whale show, The Onion decided to take a shot at it.

“Although most folks knew The Onion (and therefore understood the tweet’s satirical intent), a significant number believed the claim to be straightforward and believed the large killer whales were actually kept in large bags during tank cleaning as if they were tropical fish,” says hoax-debunking website Snopes.com. “Social media are flooded with fake news sites which aim to dupe users into sharing outlandish false stories, but The Onion is generally recognized as one of the few genuinely satirical sites on the web (i.e., it is intended to entertain readers, not deceive them).”

And for some reason, people thought it was real.

Wrote one person, “I swear to the goddess of this earth that karma will shut them down. They will get what’s coming to them.”

How do you place orcas in a bag plastic bag of water like that?

Even though many know the Onion is a satirical publication, some people still think it’s real from time to time, as the website Literally Unbelievable notes. A few weeks ago, the Onion posted an article touching on SeaWorld, and it has the title, “New SeaWorld Show Just Elephant Drowning In Large Tank Of Water With No Explanation.”

According to its About section, The Onion says, “The First Amendment protects satire as a form of free speech and expression. The Onion uses invented names in all of its stories, except in cases where public figures are being satirized. Any other use of real names is accidental and coincidental.”

But SeaWorld did, in fact, say that it would end its theatrical killer whale show.

“We start everything by listening to our guests and evolving our shows to what we’re hearing, and so far that’s what we’ve been hearing in California, they want experiences that are more natural and experiences that look more natural in the environment,” CEO Joel Manby told the San Diego Union-Tribune. “But it’s not universal across our properties.”