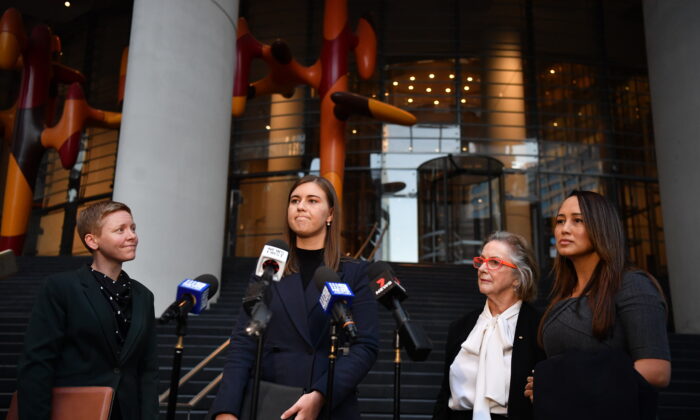 Legal and media experts in Australia have weighed in on the high-profile sexual assault trial of former Liberal Party staffer Brittany Higgins, saying the media should “have no room” in the jury’s judgment in order to have a fair trial outcome.

The comment comes after the Australian Capital Territory Supreme Court delayed Higgins’ trial until October, citing concerns that journalist Lisa Wilkinson’s speech at the Logies could prejudice the trial.

Wilkinson won the award for her reporting of Higgins’ allegation in which the former Liberal staffer accused her colleague of sexually assaulting her at the Parliament house in 2019.

In her speech, Wilkinson mentioned and praised Higgins as a sexual assault survivor, although the man has pleaded not guilty to the charge of sexual intercourse.

Joseph Fernandez, Adjunct Associate Professor at Curtin University’s School of Media, Creative Arts and Social Inquiry, told The Epoch Times that “there is absolutely no room for the media to participate in the jury’s judgement. None whatsoever.”

He said the media serves only to inform people as to what is going on in the courts, and that “intense or distorted publicity” can influence juries and “prejudge a person’s guilt or innocence.”

The sentiment was echoed by Jason Bosland, Director of the Centre for Media and Communications Law at Melbourne Law School, who told The Epoch Times that “media coverage could also interfere with a criminal trial by influencing the recollection or reliability of witness testimony.”

While Bosland declined to comment on the Brittany Higgins case directly, he stressed that a fair trial is “conducted based on admissible evidence before an impartial tribunal” and is not influenced by “extraneous media reporting or commentary.”

Consent: The Heart of The Issue

Rick Sarre, Emeritus Professor of Law and Criminal Justice at the University of South Australia, argued that despite the publicity around the case, the actual situation could be far more complex.

Sarre, who’s been a law professor for 35 years, told The Epoch Times that in mild legal crime cases such as robbery or drug trafficking, the main issue is finding out the identity of the person behind the crime.

But in most sexual assault cases, it’s about “what independent mindset was playing out at that particular episode.”

The “bottom line” is that if the jury said the man accused believed Higgins was consenting, and it’s believed that both were “a bit drunk,” then the accused would not be found guilty.

“I don’t think it’s helpful to say we have to believe all victims because a lot of them will be going to the court in those circumstances for reasons other than the fact that they were assaulted.”

What’s Behind the Intense Media Attention?

Curtin University’s media professor Fernandez argued the publicity around the case of Higgins is a result of the widespread #MeToo movement in Australia and globally.

Another factor, he said, was because the allegations concerned events that allegedly occurred on Parliament’s premises, which is a place that makes laws.

“Also, it attracted more attention because the political stakes were very high and also because of alleged cover-ups as to what happened.”

“The case became a flashpoint for a wider problem — that of rampant sexual assault and sexual harassment of women, especially by those in positions of power and influence.”