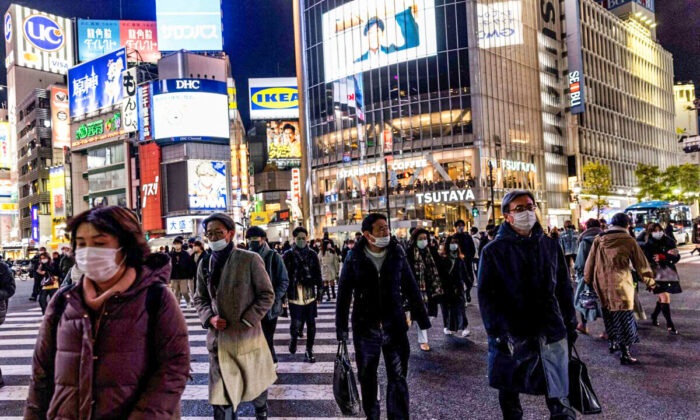 No Restrictions for Japan Despite 7th Wave of COVID-19: Expert Panel

Japan is experiencing the seventh wave of coronavirus infections, but no restrictions are necessary at this time, the head of a government COVID-19 expert panel said on Monday.

Shigeru Omi, head of the panel, said “there is no doubt that Japan has now entered the seventh wave of outbreak,” with 37,143 new cases reported on Monday, broadcaster NHK reported.

Omi attributed the increase in cases to the spread of the highly transmissible Omicron variant and the waning of the vaccine’s efficiency over time. He had also briefed Prime Minister Fumio Kishida about the situation.

“It’s important for everyone to take basic measures, such as testing, vaccines, and [other prevention measures],” he told reporters.

However, Omi said he believes that there is no need to reinstate restrictions for the time being. He said the expert panel recommended the government implement pandemic preparations and response plans.

Tokihiro Nakamura, governor of Ehime Prefecture, said the number of new patients during the week ending July 5 increased by 1.7 times from the previous week, exceeding the national average.

“We have entered an expansionary phase for infections,” he said, adding that the virus transmission was primarily due to individuals eating at restaurants for extended periods and conversing without wearing masks indoors.

Nakamura noted that Japan has not yet reached the point of imposing stringent restrictions on socio-economic activities, The Asahi Shimbun reported.

Japan has lifted most of its COVID-19 measures and resumed accepting foreign tourists from 98 countries and regions since last month, but only for package tours.

The European Medicines Agency’s Marco Cavaleri said last week that several nations in the European Union (EU) are seeing a new wave of the novel coronavirus virus, driven by mutations of the Omicron variant.

Speaking at an online press briefing, Cavaleri said the BA.4 and BA.5 mutations of the Omicron variant are expected to become dominant across the continent, “likely replacing all other variants by the end of July.”

He said that while there is no evidence the variants make people sicker than earlier strains of the virus, “the increase in transmission among older age groups is starting to translate into severe disease.”

“As this new wave is unfolding over the EU, it is essential to maintain protection of vulnerable groups and avoid any postponement of vaccination,” he said.

The World Health Organization said on June 30 that the number of new COVID-19 cases rose by 18 percent in the previous week, with more than 4.1 million cases reported globally.