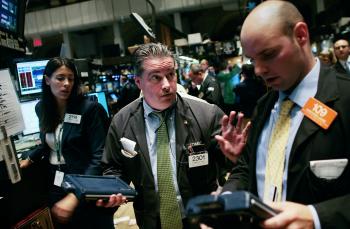 Traders talk on the floor near the end of the trading day at the New York Stock Exchange yesterday. Stocks closed down more than 700 points on Wednesday. (Chris Hondros/Getty Images)
Business

No Relief for U.S. Stocks

NEW YORK—U.S. equity markets dropped again on Wednesday on weak trailing economic indicators from the Federal Reserve. The near 8 percent slump comes a day after the U.S. government announced a plan to inject $250 billion into the banking sector.

The only difference this time was that consumer sectors led the losses.

The U.S. Commerce Department announced a 1.2 percent drop in retail sales for September, nearly twice the drop analysts expected. The declines were largely due to a steep drop in automotive purchases. Shares of discount retailer Wal-Mart Stores, Inc. closed down 8 percent on the news.

Shares of integrated oil company Exxon Mobil Corp. tumbled nearly 14 percent, and the stock of rival Chevron Corp. also dropped 12.5 percent. Double-digit declines across the energy sector were due to a decline in oil price as demand is expected to shrink in the coming quarters.

Other commodities also declined on a projected decrease in manufacturing and industrial activity. The Dow Jones-AIG Commodity Index declined more than 4 percent.

On Wednesday afternoon, the Fed released its latest “Beige Book” containing economic data from September. Manufacturing, construction, and other nonfinancial sectors experienced continued weakness. Business spending and payroll decreased in most regions across the country, according to the Fed’s report. Agricultural and natural resources industries maintained a favorable outlook.

JPMorgan Chase and Wells Fargo announced better than expected quarterly earnings, but profits were down from prior year. Coca-Cola Co. also reported a profit in the third quarter. Coke shares increased around 3 percent.

Some economists believe Wednesday’s drop is due to trailing economic indicators from September, when economic weaknesses began to escalate. The recent financial and bank rescue proposals will take at least several months to implement, and the planned cash infusions may not translate to economic stability until next year.

There were some signs that lending activity is on the rebound, as the overnight Libor rate—the interest rate banks lend to one another—fell from 2.14 percent to 2.18 percent, according to Bloomberg data.

The three month Libor, a major gauge of credit activity, also declined from 4.64 percent to 4.55 percent, says Bloomberg. The decreases in Libor are a sign that the government-led debt guarantees may be improving credit flows.

Stocks dropped sharply during the last hour of trading on Wednesday, primarily due to a large selloff by hedge funds and other leveraged funds, as investors continue to withdraw money from risky assets.

"We continue to see a vortex of selling, led by a levered, scared hedge fund community stepping on each other trying to get in front of the other guy to liquidate, based upon the real investment losses that they've experienced, coupled with the threat of year-end redemptions," Doug Kass, president of Seabreeze Partners, told the Wall Street Journal.

Analysts don’t believe the sharp declines are based on actual indication of economic projection, but due to recent hedge fund losses and an increase in margin calls. Hedge funds were forced to liquidate their positions to raise enough cash as collateral.