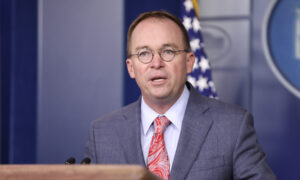 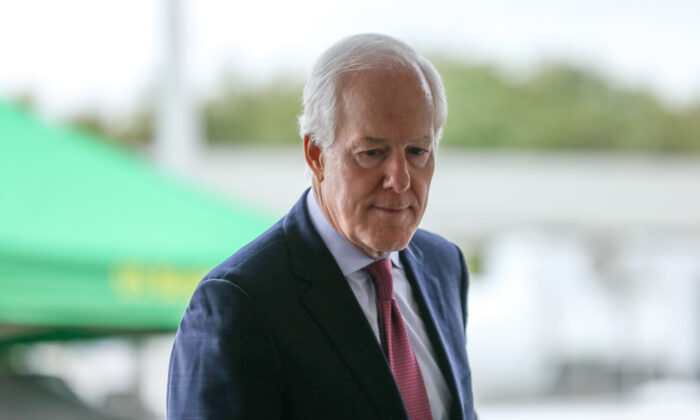 No Quid Pro Quo in Trump’s Actions, ‘Even If There Was’ It Wouldn’t Be Impeachable: Senator

There was no “quid pro quo” in President Donald Trump’s phone call with Ukrainian President Volodymyr Zelensky, a senator said.

Sen. John Cornyn (R-Texas) said he reviewed the transcript of the call and didn’t “see the quid pro quo.”

“Even if there was, I don’t think it would be impeachable or illegal for the president to do so. So this is just an excuse, I think, to continue this campaign that’s existed since the president was sworn in to remove him from office,” Cornyn said during an interview with KFYO.

He said there was a double standard being used for the impeachment inquiry.

“What never fails to amaze me is the double standard that is applied to this president as opposed to other presidents. It’s always been the case that presidents have been able to leverage aid to other countries in order to advance U.S. policy. And here there was a corruption problem in Ukraine,” Cornyn said.

The current information available to him indicates there’s no “reasonable chance” Trump is convicted in the Senate if the House impeaches the president, Cornyn added. He said Trump should focus on his job and “let the Senate do its job.”

A conviction requires the concurrence of two-thirds of the senators present. If a president is impeached but not convicted, he remains in office.

“We’ll take care of the impeachment articles if and when they come to the Senate,” Cornyn said.

Republicans have for the most part been united in criticism of the inquiry, with all GOP members present during the vote voting against the impeachment resolution last week, along with two Democratic representatives. But Democrats hold a majority in the House, and some believe Trump will be impeached by the body.

With a 53-47 majority in the Senate, a conviction carries a much lower likelihood of success.

Trump’s July call with Zelensky spurred a complaint from an anonymous whistleblower who claimed the president abused the office during the call. The person, relying on secondhand information and media reports, filed a complaint that was used by House Democrats to launch an impeachment inquiry in late September.

The White House then released a transcript of the call, followed by Democrats releasing the complaint.

During the call, Trump asked Zelensky to look into Crowdstrike, a firm that the Democratic National Committee hired to investigate a breach during the 2016 election, as well as former Vice President Joe Biden and Biden’s son, Hunter Biden.

Biden, who is running for president, last year said that while still in office in 2016 he threatened to withhold $1 billion in aid from Ukraine unless then-President Petro Poroshenko ousted Viktor Shokin, a prosecutor who was probing Ukraine-based energy company Burisma.

Republicans have pushed for the whistleblower to be identified and Trump has repeatedly said he wants the person who filed the complaint to testify before Congress. The person had indicated a bias “in favor of a rival political candidate,” according to Inspector General of the Intelligence Community Michael Atkinson, and reports indicate the person who filed the complaint worked in the Obama White House.