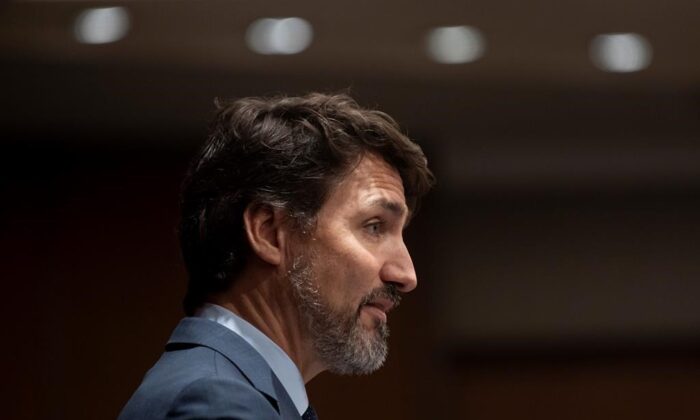 Prime Minister Justin Trudeau says there are no easy answers to the dispute over a British Columbia pipeline project that has sparked Indigenous protests at vital rail links across Canada.

In his most extensive public comments since anti-pipeline protests began affecting freight and passenger rail traffic across Canada last week, Trudeau said on Feb. 14 that the path forward is “fraught with challenges and obstacles to overcome.”

“You need to know we have failed our Indigenous peoples over generations, over centuries. And there is no quick fix to it,” Trudeau said, adding that all parties must move towards reconciliation.

“We also are, obviously, a country of laws. And making sure that those laws are enforced, even as there is, of course, freedom to demonstrate free and to protest,” he said.

“Getting that balance right and wrapping it up in the path forward … is really important.”

Transport Minister Marc Garneau said freedom of expression and the right to peaceful protest are among the most cherished of rights, but added he is “deeply concerned” about the disruption of rail services.

There is a risk of seeing the disruptions merely as interference with the operations of profit-making companies, but they affect all Canadians, he said at a news conference Feb. 14 in Toronto, where he was meeting his provincial and territorial counterparts.

“But it is about people’s jobs and livelihoods and about the transport of key supplies like food, propane, heating oil and chemicals for water treatment, agricultural products for export, and so many other products,” he said.

Garneau stressed that he hopes there will be peaceful resolutions to the blockade disputes.

He was to meet representatives of national Indigenous organizations to discuss a way forward.

Tensions could heat up Feb. 14, with the added threat of activists planning to shut down government offices in British Columbia’s capital.

Protests continue as political leaders look to negotiate solutions, while business leaders, opposition politicians, and ordinary people call for immediate action to end the disruptions, which have already seen more than 80 arrests.

Trudeau and B.C. Premier John Horgan spoke on Feb. 13 about the need to work together to resolve the pipeline tensions that have resulted in solidarity blockades in Ontario, Manitoba, and B.C.

Indigenous leaders in B.C.’s northwest have invited federal and provincial politicians to meetings to find solutions, and said they would ensure a blockade of a Canadian National Railway track near New Hazelton, B.C., would come down during talks.

The railway said Feb. 13 it was starting a progressive shutdown in the East, while Via Rail cancelled all service on CN tracks in Canada.

The blockades began last week after RCMP enforced an injunction against Wet’suwet’en hereditary chiefs and their supporters, who were blocking construction of the Coastal GasLink natural gas pipeline, a key part of the $40 billion LNG Canada export project.

Horgan has rejected calls from the Opposition Liberals to seek immediate injunctions to end the blockades and protests in B.C.

“We can’t just use force,” he said in the legislature. “It needs to be dealt with by cooperation, by consultation, by discussion so that we can all move forward.”

Liberal leader Andrew Wilkinson said Horgan was taking an “entirely passive approach in the face of implacable protesters who are intent on shutting down constituency services, shutting down the universities, shutting down our transportation arteries.”

“The issues going on right now, these days, in Canada are pitting Indigenous Peoples and concerns about the environment against economic development,” Trudeau said.

“But, of course, there are lots of Indigenous Peoples who want economic development. They just need to want to see this being done in the right way, and in a way that is respectful and partnership.”

Groups including Grain Growers of Canada, Forest Products Association of Canada, and the Canadian Manufacturers and Exporters have said rail delays caused by the blockades are hurting their members and the economy.

Teamsters Canada, the country’s largest union in the transportation sector, called on the federal government to intervene.

The union warned the impasse could put up to 6,000 employees at CN and other rail companies out of work.

Protesters have threatened to block government buildings in Victoria on Feb. 14, but late Feb. 13 a B.C. Supreme Court judge granted an injunction against further blockades at the legislature.

Coastal GasLink has signed agreements with all 20 elected band councils along the pipeline route.

However, Wet’suwet’en hereditary chiefs assert title to a vast 22,000-square-kilometre area and say band councils only have authority over reserve lands.

By Mia Rabson and Dirk Meissner