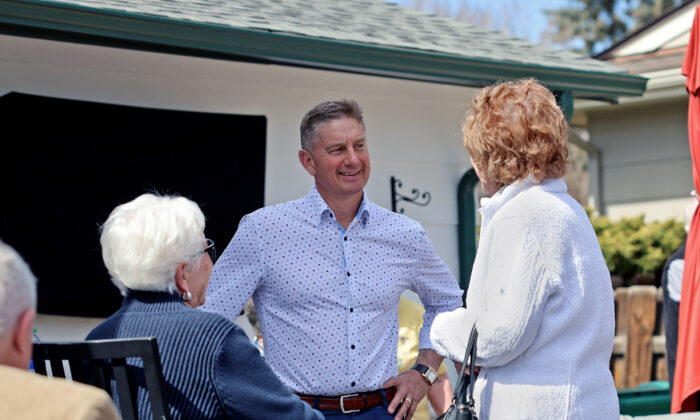 Colorado Congressional District 7 Republican primary candidate Tim Reichert says voters “love the idea that an economist … is running for Congress” and that his plan “restoring the American middle class” will prove the difference in winning the June 28 vote against two GOP rivals. (Courtesy of Tim Reichert For Congress)
2022 Midterm Elections

The June 28 Republican primary for Colorado’s Congressional District 7 (CD 7) is a three-way race between a grassroots activist with “real-world experience” as a small business owner and home-school mom, a West Point graduate and U.S. Army combat veteran who works in the oil patch, and an economist with a plan for “restoring the American middle class.”

All three also emphasize their status as political newcomers motivated to run for public office by the failure of “professional politicians” to tackle and solve local, state, and national problems.

The district primary is projected to be among the closest races in Colorado leading into November’s midterm 2022 election.

It is guaranteed to deliver a new representative with the pending retirement of eight-term U.S. Rep. Ed Perlmutter (D-Colo.).

The Republican primary survivor will take on state Sen. Brittany Pettersen (D-Lakewood) in November. The veteran Democratic state lawmaker qualified for the ballot through the assembly process.

Pettersen was placed on the ballot in assembly votes. No challenger petitioned to face off in a primary, so she is already campaigning in a district now more favorable to Republicans.

According to the Colorado Secretary of State Office, there are 142,996 registered Democrats, 128,404 registered Republicans, and 234,980 registered voters unaffiliated with any party now in the reconfigured district.

Despite a D+6 rating, the number of independent voters makes the district “competitive,” according to FiveThirtyEight. The Cook Partisan Voting Index rates CD 7 “likely Democratic” but also “competitive.”

Those independents—44 percent of about 515,000 registered voters—will determine who wins in November.

That is something those voting must consider when assessing candidates to take on Pettersen, said Republican primary hopeful Erik Aadland, a former U.S. Army officer and West Point graduate running for his first political office.

Aadland of Littleton said he checks all the boxes for CD 7 conservative voters but can win in a general election in the blue-tinged purple district because he is the only veteran in the race.

He said that veterans are “absolutely” garnering voters’ interest because “veterans have demonstrated service” and the proven capacity to work through ideological differences to produce tangible results that benefit all.

“We need people of character and veterans have demonstrated that,” said Aadland, an Iraq and Afghanistan combat veteran who has spent the past decade working as an oil and gas project manager across the West and in Israel.

His Republican rivals also say they represent something new and dynamic in the party, and those distinctions are what will make them effective in representing the district in Congress.

“I’ve been on the ground for a year-and-a-half,” talking with voters who are “itching for someone new, something different,” said Imer of Golden.

“I’m in it to win it. I didn’t just jump into this,” she said, citing her “real-world experience” as a homeschool mom, small business owner, and grassroots activist as qualities that what will appeal to primary and general election voters.

“Voters need to make the right decision and pick the right person. I feel confident that person should be me,” she said.

Economist Tim Reichert said as a political newcomer he has no tolerance for “career politicians who have stopped working for Coloradans” to play partisan politics.

He didn’t enter the race until after creating an eight-point plan, Handshake with the Middle Class, which he said is “a real plan, a substantive plan” that voters can read and contemplate.

It has drawn positive responses on the campaign trail, Reichert said, because it’s tangible, implementable, and most likely to appeal to Republican voters and be embraced by GOP lawmakers.

“Voters love the idea that an economist—who took 15 months before he ran to develop a plan to save the American middle class—is running for Congress,” he said.

The CEO of Denver-based Economics Partners and a resident of Golden, Reichert said under “career politicians” over the past few generations “the middle class has lost.”

Border security, education, energy policy, and election integrity are also part of Reichert’s agenda, as they are in Imer’s and Aadland’s campaigns.

Prospective voters are “saying inflation is the major issue, but it sits at the top of an array of issues” that need to be addressed to restore an economy that benefits the middle class, Reichert said.

“Inflation is the top issue at the moment,” she said, but education “is in the forefront of concerns” expressed by parents she has met over the past 18 months.

Crime and border security are also significant issues that Colorado voters see as intertwined because of the impact Chinese-made fentanyl smuggled across the Mexican border has had on the state, she said.

Fentanyl “is at the top of everybody’s mind,” Imer said. “Parents are scared; even the teenagers are scared” because they fear it being laced in drinks and “everyday drugs. It is very dangerous. [Voters] are paying attention.”

In terms of cash contributions, Imer has only raised $85,561 and spent $79,834, according to her campaign’s June 8 filing with the Federal Elections Commission (FEC).

But with social media, text messages, and a newly established “radio presence” all serving as “key components” in her 18-month ground game, Imer said her extensive time on the campaign trail will pay dividends on June 28.

On the other end of the campaign funding spectrum, Reichert has raised more than $1 million for his campaign, spent $590,475, and had $409,764 in cash on hand on June 8, according to his campaign’s FEC filing.

Nearly half of Reichert’s campaign funding comes from his own pocket with a $500,000 donation, which he touts as a sign of his commitment and independence from donors once in office.

Not so, maintains Aadland, who said Reichert’s campaign is financed by the “wealthiest” of the elite from within the district and from around the country, and that is who he will represent if elected to Congress.

The $474,229 his campaign reported raising in its June 8 FEC report is mostly $100 donations from hundreds of average Joe voters, who would be his priority serving in Congress, Aadland said.

He had no interest in politics and “never endeavored” to run for political office but opted to do so because “the country is in a generational crisis” and needs doers, not grandstanders, to revitalize it.

“I began this campaign with no political connections, as a total grassroots candidate,” he said.

Like Imer and Reichert, he will be hitting the streets, shopping centers, phone lines, and airwaves over the last weekend before the primary hard to make their last pitches.

Aadland said he doesn’t need voters to tell him that inflation is the top issue on people’s minds because it is affecting where he and his volunteers will travel in the coming days.