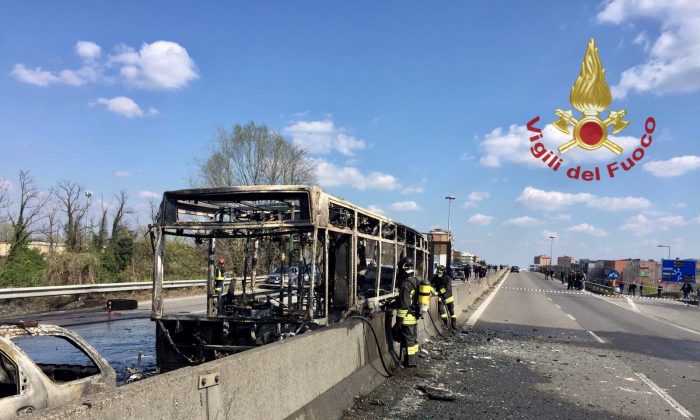 The wreckage of a bus that was set ablaze by its driver in protest against the treatment of migrants trying to cross the Mediterranean Sea, is seen on a road in Milan, Italy, March 20, 2019. (Vigili del Fuoco/Handout via Reuters)
Europe

‘No One Will Survive:’ Driver Hijacks Packed School Bus, Sets It on Fire in Apparent Protest

A driver hijacked and set ablaze a school bus with 51 children aboard on the outskirts of Milan—Italy’s business capital—on March 20, Italian authorities said.

All 51 school children managed to escape the bus with the help of police before it was engulfed in flames. Twelve of the children were reportedly taken to the hospital as a precautionary measure due to bruises and shock, reported The Sun. None of the children suffered serious injuries.

Awful news in Italy – more here as we get it:

Police identified Ousseynou Sy, 47, as the driver who allegedly shouted “No one will survive” as he rammed cars on a provincial highway and threatened to douse the children with gasoline and set them alight.

“He shouted, ‘Stop the deaths at sea, I’ll carry out a massacre,'” police spokesman Marco Palmieri quoted Sy as telling police after his arrest. At the time of the incident, Sy was driving the children from Vailati di Crema school to the gym, according to the news website.

One of the children managed to call the police, who rushed to the scene and broke windows to get all the children to safety. A teacher who was with the middle school children was quoted by Ansa news agency as saying that the driver had said he wanted to get to the runway at Milan’s Linate airport.

Sy apparently went on a rampage in an apparent protest against migrant drownings in the Mediterranean. One of the pupils said, “He wanted to kill us. He said he lost three daughters at sea,” according to The Sun.

An unnamed girl was also quoted as saying that Sy blamed deputy prime ministers Matteo Salvini and Luigi Di Maio for the deaths of African migrants at sea.

Sy, who is an Italian citizen of Senegalese origin since 2004, was arrested on suspicion of kidnapping, intention to commit mass murder, arson, and resisting law enforcement. He was also treated for burns. The 47-year-old has a criminal record for drunken driving and for sexual abuse on a minor, reported La Repubblica.

Sy had worked for the bus company for 15 years without any issues related to his work performance, reported Sky TG24.

Italy’s Ministry of Defense thanked the police for the efforts to save the school children.

The United Nations estimates that some 2,297 migrants drowned or went missing in the Mediterranean in 2018 as they tried to reach Europe.

A Libyan security official said on March 19 that at least 10 migrants died when their boat sank off the Libyan coast near the western town of Sabratha.

The Italian government has closed its ports to charity rescue ships that pick up migrants off the Libyan coast. Deputy Prime Minister Salvini said this has helped reduce deaths because far fewer people are now putting to sea.

Human rights groups said deaths might have increased with hardly any boats now searching for the would-be refugees.