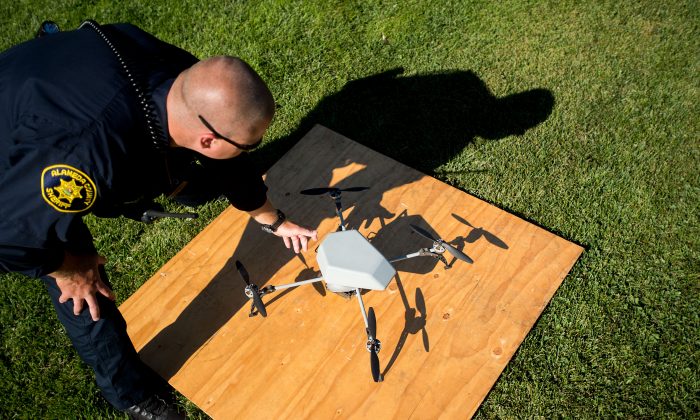 Alameda County Sheriff's Deputy Dave Durbin prepares to fly a drone during a demonstration of a search and rescue operation in Dublin, Calif., on Aug. 14, 2015. (AP Photo/Noah Berger)
Tech

Earlier this week, a Daily Beast article sparked a barrage of news reports that gave the impression that police departments in North Dakota were gearing up to send out quadcopters mounted with tasers, tear gas spray, and nonlethal firearms.

“New law permits North Dakota cop drones to fire beanbag rounds from the sky,” read a headline on Ars Technica; “Some Cops Are Now Allowed to Taser and Tear Gas People From Drones,” reads another by Gizmodo.

In reality, the state government gave no such sanction to the police, who themselves have no intention of equipping their drones with weapons. The official drone policy of the Grand Fork County Sheriff’s Office (GFSO) prohibits the “deployment of any type of projectile, chemical agent, or electrical current weapon.”

Why the Government Is Worried About Potential for Drone Terrorism

The North Dakota Legislature couldn’t have legalized the use of weaponized drones because technically, it was already legal. And not just in North Dakota, but in all states that don’t explicitly outlaw the practice, since most don’t have any laws on drones yet.

“Most aspects of policing, including the use of new technologies, do not have to be specially legalized,” according to Seth Stoughton, an ex-police officer and assistant professor of law at the University of South Carolina with a specialization in police regulation.

“Assuming an agency has the resources to do something and that the agency is willing to do something (as a matter of policy), they can do it unless state law says they can’t,” commented Stoughton via email.

Playing Catch Up With Technology

The confusion arose out of a new law in North Dakota that restricts how surveillance drones can be used by law enforcement. The law requires police to obtain a warrant, with few exceptions, before using drones for surveillance purposes and outlawed the outfitting of drones with lethal weapons.

Most aspects of policing, including the use of new technologies, do not have to be specially legalized.
— Seth Stoughton

There had been initial proposals in the state legislature to restrict police drones from being equipped with less than lethal force, but such language was not included in the final legislation, fueling the rumor that the state has authorized the police to weaponize their drones.

“The assertion that North Dakota has a law that permits weaponized drones is completely inaccurate,” said Alan Frazier, a professor at the University of Dakota and a drone supervisor for the Grand Fork Sheriff’s Office in North Dakota. “The focus and intent of North Dakota Century Code 29-29.4 is a requirement for police to obtain a search warrant before conducting surveillance with an unmanned aircraft. There are only 15 states that have addressed any type of UAS [Unmanned aircraft systems] legislation, it’s a void there. Does it mean that those 35 states tacitly approve the use of weaponized drones? Of course not!”

The rapid emergence of drones as a cheap, pervasive gadget has caught legislators flat-footed, and the laws are only starting to catch up with technology. In July, after a video of a gun being shot from a drone went viral, the Connecticut police blankly said that the activity didn’t break any state laws, according to Fox Connecticut.

However, police departments haven’t jumped on the opportunity to affix their drones with weapons, out of both safety concerns, and because the technology isn’t readily available.

“Equipping the aircraft with weapons of any type is strongly discouraged.” reads a 2012 guideline from the International Association of Chiefs of Police. “Given the current state of the technology, the ability to effectively deploy weapons from a small [unmanned aircraft] is doubtful.”

However, drones have already proven an invaluable aid to police as an extra set of eyes. Last September, North Dakota police apprehended four men who fled into a cornfield after being pulled over for a DUI, all with the help of a drone, according to Police Magazine. In June, Wisconsin police used a drone to find a robbery suspect, according to NBC.

“Our only aerial asset is and only will be drones,” said Frazier, who estimates that a single helicopter would cost $1.8 million, compared to a mere $30,000 for a drone system. “We could never afford a helicopter.”

Part of the uncertainty surrounding the potential application of police drones can be blamed on the Federal Aviation Agency (FAA), which is tasked with regulating the new technology, but has failed to come up with detailed guidelines in a timely manner.

“The lack of clear guidance and best practices has led to confusion among the law enforcement community regarding about what law enforcement is allowed to do when they encounter a UAS,” Richard Beary, president of the IACP, told the House Committee on Homeland Security in March.

This has forced state governments to come up with their own regulations. In North Dakota, the use of surveillance drones without a warrant is forbidden except for the patrol of the national border, surveying environmental catastrophes, university research, and during exigent circumstances, such as manhunts for a thief or murderer on the run.

In some places, the fear that police drones could encroach upon our privacy has spawned legislation that would restrict even the latter. In September, the California state Legislature passed a bill that would require a warrant whenever the police utilized a surveillance drone, with environmental disasters as the sole exemption, but Gov. Jerry Brown vetoed the bill, citing the exemptions as “too narrow,” presumably with exigent circumstances in mind.

The lack of a clear and uniform federal guideline has cast shadows on police drone operations. The Daily Beast report insinuates that the GFSO had been running covert drone missions, since it reported only 21 missions in the last three years, but a file from the FAA indicates that there had been 401 drone operations.

However, the latter figure likely includes practice flights that the office had been conducting on open ranges, not surprising since the first police drone was flown in North Dakota in 2013.

“A ‘flight’ is a single takeoff and landing,” Frazier said. “The vast majority of flights the GFSO reported to the FAA were training flights over our GFSO outdoor shooting range, which is located in a sparsely populated portion of the county.”