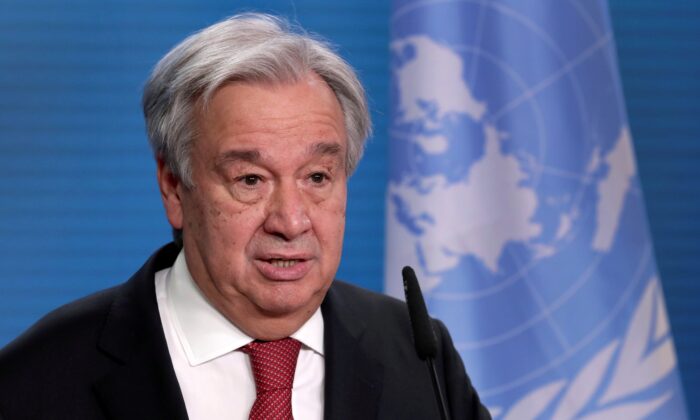 ‘No New Coal Plants Should Be Built’: UN Secretary-General to World Economic Forum

In a special address to the World Economic Forum’s Davos Agenda 2022, United Nations Secretary-General António Guterres said that “no new coal plants should be built.”

“This must be a priority for us all—to phase-out coal,” he said.

Guterres, a former prime minister of Portugal who also previously led the Socialist International, has served as secretary-general of the UN since 2017.

His remarks come just months after the COP26 climate change conference in Glasgow, Scotland. The final COP26 decision text asked parties to “[accelerate] efforts towards the phase-out of unabated coal power and inefficient fossil fuel subsidies, recognizing the need for support towards a just transition”—a significant change from a parallel passage in the text’s first draft, which “calls upon parties to accelerate the phasing-out of coal and subsidies for fossil fuels,” without mentioning any “need for support.”

“Other countries face enormous structural obstacles. They have an energy mix that relies on heavy dependence on coal, and that stands in the way of progress for all. So, they need assistance. Let’s not go into blame and shame. Let’s assist—help—the emerging economies to accelerate the transition,” Guterres said.

“We have had the U.S. and China making an agreement that I hope will provide China with more adequate technologies in order to accelerate the transition from coal.”

Guterres was referring to a joint declaration between the United States and China at COP26.

In that agreement, the parties pledged to accelerate “climate technology innovation” and to coordinate on “deployment and application of technology such as CCUS and direct air capture.” China pledged to “phase down coal consumption during the 15th Five Year Plan and make best efforts to accelerate this work.”

U.S. State Department officials didn’t respond by press time to a request by The Epoch Times for clarification on the specific technologies China will receive from the United States as part of the Glasgow agreement, as well as what the United States could expect to receive in exchange.

U.N. officials didn’t respond by press time to a request for comment about China’s status as an “emerging economy.”

The International Monetary Fund (IMF), an institution in the U.N. system, defines China as an “emerging market” as of 2021, according to an analysis from the IMF’s Francisco Arizala and Di Yang on its website.

As of February 2021, the country was in the midst of developing 247 gigawatts of new coal power, according to the Centre for Research on Energy and Clean Air, equivalent to more than 20 percent of the United States’ 1,200-gigawatt generating capacity.

A report from climate think tank Ember found that China alone was responsible for 53 percent of coal-fired electricity in the world as of 2021. In 2015, it accounted for only 44 percent of global coal power.

In the United States, meanwhile, the Environmental Protection Agency (EPA) recently walked back an approval from the Trump administration regarding Unit 2 of the Jim Bridger coal plant in Wyoming. The EPA’s disapproval, if finalized, could shutter the unit, potentially costing hundreds of jobs.

U.S. coal stockpiles have also rapidly declined, reaching a historic low in September 2021, last seen in 1978, according to the Energy Information Administration (EIA).

The Epoch Times has reached out to the EIA for the latest statistics on the country’s total coal stockpiles.

At COP26, U.S. Climate Envoy John Kerry told a Bloomberg reporter that by the end of this decade, the United States “won’t have coal.”

Davos Agenda 2022 began with a special address from Chinese leader Xi Jinping, who was introduced by WEF President Klaus Schwab.

“Developed economies should take the lead in honoring their emissions reduction responsibilities, deliver on their commitment of financial and technological support, and create the necessary conditions for developing countries to address climate change and achieve sustainable development,” Xi said during his remarks.

The World Trade Organization (WTO) defines China, admitted to the organization in 2001, as a “developing country.”

In his special address, Guterres also commented on the COVID-19 pandemic, stating that “if we fail to vaccinate every person, we give rise to new variants that spread across borders and bring daily life and economies to a grinding halt.”

“We must prepare for the next pandemic through commonsense investments in monitoring, early detection, and rapid response plans in every country, and by stressing the authority of the World Health Organization,” he said.

The World Health Organization, which falls under the aegis of the U.N., was met with widespread criticism for its early response to the COVID-19 pandemic.

In an April 2020 ‘Argument,’ Foreign Policy described the organization as “China’s coronavirus accomplice.” In a May 2020 op-ed for Newsweek, John Yoo and Robert Delahunty described WHO as “not salvageable,” citing its role in amplifying what they called Chinese “disinformation” about the novel coronavirus at an early, critical stage in the emergence of a global pandemic.