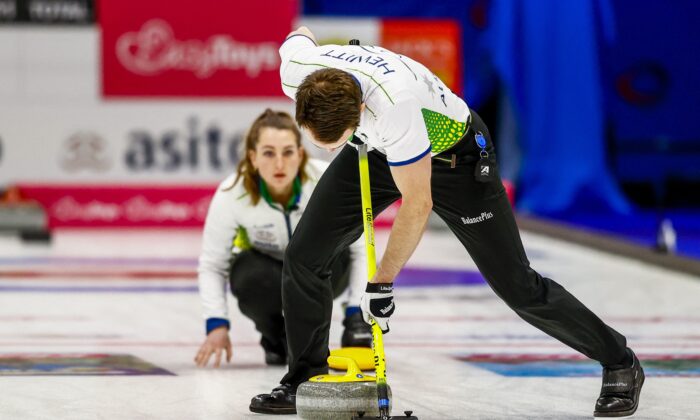 Australia's Tahli Gill and Dean Hewitt compete in the mixed-team curling qualifying tournament for the Beijing 2022 Winter Olympics, at the Eleven Cities Hall, in Leeuwarden, the Netherlands, on Dec. 8, 2021. (Vincent Jannink/ANP/AFP via Getty Images)
Australia

Australia’s chef de mission for the 2022 Beijing Winter Olympics, Geoff Lipshut, said he has no security or safety concerns for athletes competing this February, meaning the team will take no special protective measures such as burner phones.

This comes after Australia joined the ranks of the United States, Britain, and several allies in a diplomatic boycott of the Games to protest human rights abuses committed by the Chinese Communist Party.

Lipshut said he didn’t expect any safety issues to be upcoming, reasoning that the Olympics would remain one of the safest places in the world for athletes.

“I think our first aerial team went there in 2003 or 2004 and we’ve been going back every year since and there haven’t been any issues,” Lipshut said on Jan. 23.

“During the Olympic Games, I would expect the IOC to have done a lot of work and … the old saying is if you want to be in the safest place in the world, you should be an athlete in the Olympic Games.

“I really think there’ll be less risk than normal,” he said.

However, Lipshut said that the Australian team remained on guard, and he encouraged athletes to access the internet while staying at the Olympics village.

Delegations from several countries have urged those coming to Beijing to bring burner phones with them instead of their personal devices, fearing the communist regime could compromise their personal information.

Nevertheless, Danielle Scott, an Australian aerial skier, did not see the need for being overly cautious and would not bring an alternative phone to China.

“No I don’t think I’ll be going excessively cautious,” Scott said at the team announcement. “It’s just maybe not doing anything financial or, you know, risky things that you wouldn’t do anywhere around the world.”

An outbreak of COVID-19 caused by the Omicron variant in China has also wreaked havoc as the U.S. National Hockey League prohibited all of its players from participating, saying the pandemic has brought uncertainty to the Game.

Echoing those sentiments, American broadcaster NBC refused to send commentators to the country.

While organisers announced they would not allow spectators at Olympics events, including local Chinese, all athletes, officials, and journalists must stay within a closed loop that encompasses competition venues and accommodation, and go through strict testing.

Laura Peel, the world aerials champion who will be competing in her second Games, said that she had made good preparation in the last two years when competing with no fans.

“It will be different, absolutely, compared to past Olympic Games,” Peel said.

“But over the past few years, we’ve done quite a few competitions without crowds and without those supporters like we used to so I think we’re as well prepared as we can be.

The flight carrying the Australian team will land in Beijing this week.