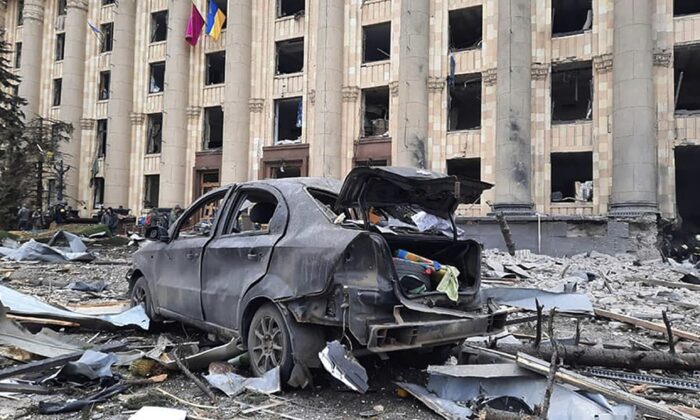 A burnt car is seen in front of a damaged City Hall building, in Kharkiv, Ukraine, on March 1, 2022. (Ukrainian Emergency Service via AP)
Russia-Ukraine War

NATO Secretary-General Jens Stoltenberg said the alliance will not change its nuclear alert level, coming after statements from Russia’s leadership.

“We will always do what is needed to protect and defend our allies, but we don’t think there is any need now to change the alert levels of NATO’s nuclear forces,” Stoltenberg told The Associated Press on Tuesday night. Stoltenberg had just spoken to Polish President Andrzej Duda at an airbase in Lask, where U.S. and Polish fighter planes are stationed.

Earlier this week, Russia has raised the specter of nuclear war after President Vladimir Putin issued a weekend order to raise his country’s strategic deterrence level, which includes the country’s nuclear arsenal. France, the UK, and the United States, which are NATO member states, possess nuclear members.

“We strongly believe it’s reckless and irresponsible the way Russia is speaking about nuclear weapons,” Stoltenberg told the AP. Stoltenberg also stressed that Russia has signed a number of deals that agree nuclear war cannot be won and shouldn’t be fought.

And it is NATO’s responsibility to “ensure that we don’t see a development where a conflict in Ukraine spiraled out of control and becomes a full-fledged confrontation between NATO and Russia in Europe,” Stoltenberg continued.

Russia’s neighbor and ally, Belarus, held a referendum to drop the country’s non-nuclear status. European and NATO officials said that the move means it may start hosting Russian nuclear weapons.

“We know what does it mean for Belarus to be nuclear. It means that Russia will put nuclear weapons in Belarus and this is a very dangerous path,” EU foreign policy chief Josep Borrell stated on Monday.

On Tuesday, satellite photos showed a miles-long column of tanks and armored vehicles was moving toward the Ukrainian capital, Kyiv. A U.S. Defense official told reporters that the column had not made any advances in the past 24 hours due to logistics problems, including a shortage of fuel and food.

Russia’s Defense Ministry said via state-run media that it would hit targets in Kyiv, including communications sites, while warning that residents should leave their homes. However, the Russian officials did not provide information about what targets it would strike.

Video footage and photos uploaded Tuesday show that a TV tower in Kyiv was struck along with a large explosion. Ukrainian officials, through social media channels, blamed Russian forces for the attack and said at least 10 people were killed.

In Kharkiv, located in the northeastern portion of the country near the Russian border, numerous missile and artillery strikes were reported, officials said, adding that dozens of people were founded or feared killed.