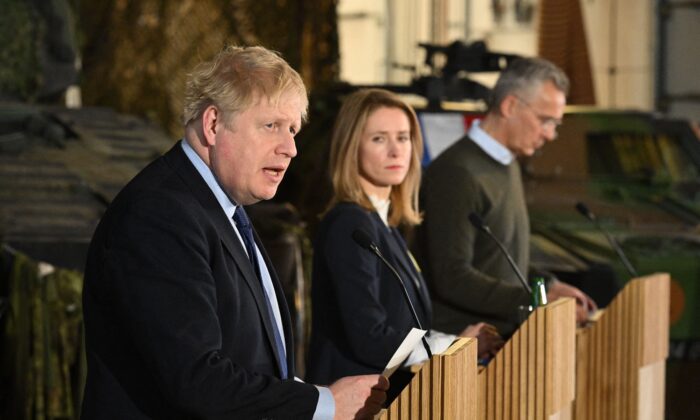 British Prime Minister Boris Johnson has ruled out a no-fly zone over Ukraine, insisting that no NATO allies are contemplating such a move as it would risk a direct conflict between the alliance and Russia.

Ukrainian President Volodymyr Zelensky has repeatedly requested a NATO no-fly zone over his country to prevent Russian jets from carrying out bombing runs on Ukrainian targets.

But during a diplomatic visit to Eastern Europe on Tuesday, Johnson said such a move is not being considered by any NATO country.

“I think for any NATO member to get involved actively in conflict with Russia is a huge step which is not being contemplated by any member,” he said during a press conference at the Tapa military base in Estonia.

“This is a time when miscalculation and misunderstanding is all too possible and it’s therefore crucial that we get that message over.

“When it comes to a no-fly zone in the skies above Ukraine we have to accept the reality that that involves shooting down Russian planes … that’s a very, very big step, it’s simply not on the agenda of any NATO country.”

Johnson ruled out British forces fighting in Ukraine, and clarified that the UK is not actively supporting British nationals volunteering to help the defence of Ukraine, contradicting an earlier remark from Foreign Secretary Liz Truss.

Earlier in the day, at a press conference in the Polish capital Warsaw, a Ukrainian journalist who fled over the border made an impassioned plea for the UK to assist with a no-fly zone.

Daria Kaleniuk, the executive director of the Anti-Corruption Action Centre civil society organisation, said: “NATO is not willing to defend because NATO is afraid of World War Three, but it’s already started and it’s Ukrainian children who are there taking the hit.”

Johnson responded by saying, “I’m acutely conscious that there is not enough that we can do, as the UK government, to help in the way that you want and I’ve got to be honest about that.”

He said a no-fly zone would mean the UK would be engaged in direct combat with Russia. “That’s not something that we can do or that we’ve envisaged. The consequences of that would be truly very, very difficult to control,” he said.

The United States and NATO have also rejected this idea.

White House press secretary Jen Psaki said on MSNBC on Monday morning that setting up a no-fly zone would be “definitely escalating” the situation and would “potentially put us in a place in a military conflict with Russia.”

“That’s something the president doesn’t want to do,” she said.

NATO Secretary-General Jens Stoltenberg also told MSNBC that the alliance has “no intentions of moving into Ukraine neither on the ground or in the airspace,” noting that such a scenario could see the conflict “spiral out of control that escalates even further into concern for full-fledged war in Europe involving NATO allies.”

Jack Phillips and PA Media contributed to this report.