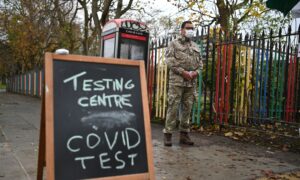 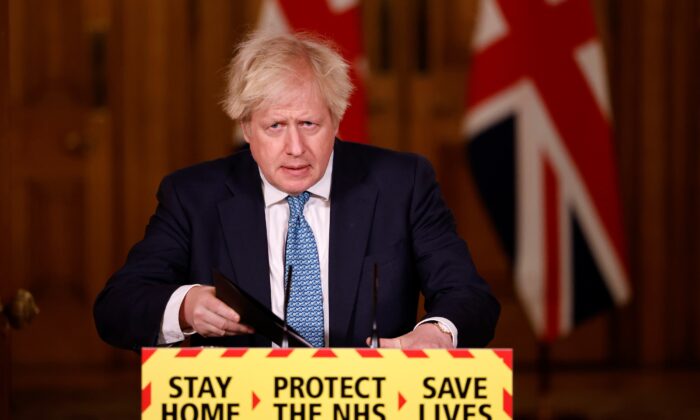 The UK government wants no one to be more than 10 miles away from their nearest vaccination centre, under plans currently being set up with the guidance of army logistics.

Prime Minister Boris Johnson said that the government would be providing hundreds of thousands of vaccines a day by the end of next week.

Within five weeks, he said, there was “no doubt” the government could vaccinate the first four priority groups, which make up some 15 million people.

“It is our plan that everyone should have a vaccination available within a radius of 10 miles,” Johnson said during a press conference on Thursday.

“It follows from that, that the limits will not be on our distributional power but on the supply of vaccines—and I have no doubt that we have enough supply to vaccinate these four groups by the February 15 deadline, and we also have the distributional network to do it.”

Sir Simon Stevens, chief executive officer of NHS England, said that vaccines are being given by three routes: through GP practices, which is the main method; through hospitals; and through large vaccination centres.

Those larger centres have the advantages of longer opening times, seven days a week, and are more efficient.

However, he said that providing a mixture of routes allowed more flexibility.

Johnson noted that the UK has vaccinated more people than the rest of Europe combined.

The UK has approved vaccines quickly and was the first country in the West to approve any vaccine for the CCP (Chinese Communist Party) virus, with three now approved.

Just as the vaccine rollout began to start, however, the UK struggled to contain a surge in the virus, which scientists and the government say is due to a more transmissible variant.

The prime minister said that over 1.5 million people have now received their first dose of a vaccine. “Within two to three weeks, all of them will have a very considerable degree of immunity,” he said.

The logistics arm of the military—normally responsible for maintaining supply chains in fast-changing war zones—has been enlisted to help manage the rollout alongside the NHS.

Brigadier Phil Prosser, commander of military support to the vaccine delivery programme, said that the rollout so far had been equivalent to setting up a supermarket chain within a month.

“I found this logistic operation to be unparalleled in its scale and complexity. And I say this having served on operations around the world,” Prosser said.

“We aim to deliver vaccine as soon after it is supplied as possible, not leaving vast quantities in the warehouse. It needs to be in arms, not on shelves.”