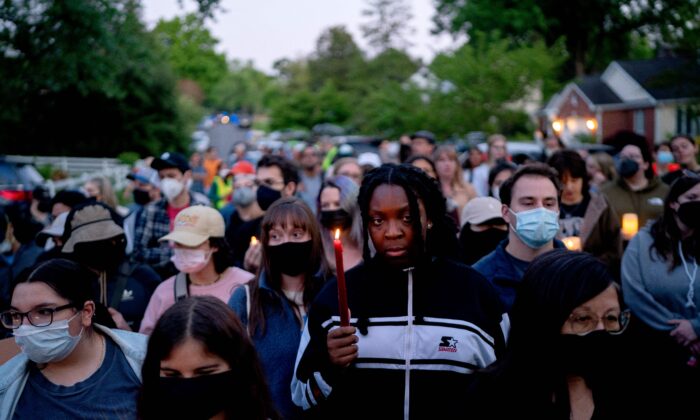 Demonstrators gather outside the home of Supreme Court Justice Samuel Alito in Alexandria, Va., on May 9, 2022. (Stefani Reynolds/AFP via Getty Images)
Viewpoints

No Mob Rule, No Criminal Domination

Two patterns of destroying civilization are coming together to form a river of violence and intimidation that can destroy the Constitution, the rule of law, and the very basic elements of our free society.

On the political front, there is a self-righteous fanaticism dominating the secular-religious intensity of the left. This has convinced many on the left that the end justifies the means, and therefore, they have the right to break the law for political purposes.

Whether it is burning down neighborhoods, smashing store windows, or throwing Molotov cocktails into pro-life offices, the “woke” left has now broken free from the restrictions of the American system of law and constitutional government.

Theodore White warned of this growing extremism in his book, “The Making of the President 1972,” when he described the militant, uncompromising left as having moved from a liberal ideology to a liberal theology. Now, 50 years later, the theology of the woke left has grown more extreme, more hostile, and more willing to use force and intimidation to get what it wants.

I should note that mobs are always wrong, whether it is a summer of riots in cities, people occupying the Capitol on Jan. 6, 2021, or mobs staking out the homes of Supreme Court Justices.

Most recently, the mobs threatening conservative justices, protesting outside of their homes, and consciously seeking to intimidate them into voting as the left demands is an example of the political violence that’s growing and becoming legitimized on the left.

This political violence is paralleled by the personal violence of hardened criminals that the left is releasing from jail and putting back on the street. The timidity of the innocent in refusing to put down either mobs or criminals increases the demands and the dangers of both.

The spirit of breaking the law in large groups is mob violence. In small groups, that spirit is criminal. However, when criminals see mobs being tolerated, they are more likely to believe that there will be no consequences for committing crimes.

The 1982 Atlantic Monthly essay “Broken Windows: The Police and Neighborhood Safety” by George L. Kelling and James Q. Wilson, established a framework for a revolution in policing. When Bill Bratton took their theory and turned it into practical policing in Boston, New York, and Los Angeles, the effect was revolutionary.

Effective and serious policing, backed up by district attorneys who fought for the rights of innocent victims and were tough on the criminal, led to dramatic declines in crime and amazingly safe cities. The left hated it. (Recall the left’s hatred of the police with the Black Panther public commitment to killing policemen in the late 1960s.)

The threat to society from a collapse of cultural values was made explicit in a brilliant 1993 essay for The American Scholar by Sen. Daniel Patrick Moynihan, who was a renowned sociologist before entering public life.

We have had several decades of the woke left and big government socialism promoting and glorifying anti-social behavior, violence, criminals, and hostility toward the police and toward middle-class values.

In many ways, the 1971 movie, “A Clockwork Orange,” which was based on Anthony Burgess’s 1962 novel, was a prophetic forecast of a dystopian future of mindless violence, helpless victims, and brutality. Today, when there is a juvenile gang in Boston led by an 11-year-old, when six people are shot in Atlanta on Mother’s Day, when carjackings occur in public in New York, and when a theater in Chicago cancels a nighttime performance because of a nearby shooting, “A Clockwork Orange” might be a useful reference for every American.

Americans are at a crossroads. Americans must decide whether to continue to ignore the decay of the left’s insanely destructive policies, or, whether the time has come to reassert the right of citizens to expect personal safety as the first responsibility of government.

Anyone threatening a Supreme Court justice is violating the law and should be imprisoned for at least a year. Anyone engaged in violent crime should be locked up until they are too old to be dangerous.

It’s time for the innocent and the law-abiding to reimpose civilization on the vicious, the violent, and the predatory.

It really is that simple.

The question is whether the American people are ready to throw out the politicians who have put their lives and their country at risk.