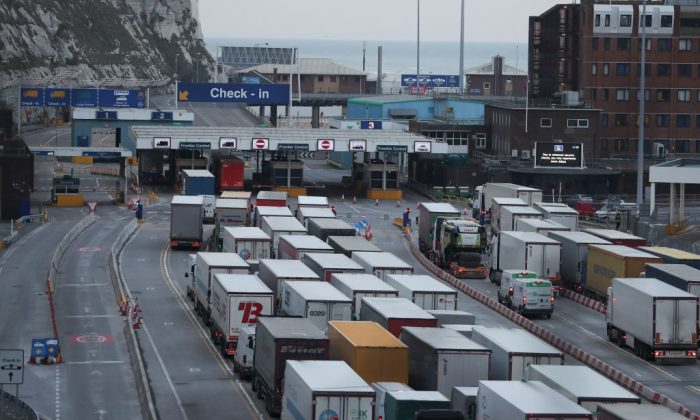 Lorries queue up at the port of Dover on the south coast of England on March 19, 2018. (Daniel Leal-Olivas/AFP/Getty Images)
UK

No Matter the Deal, Households Will Be Worse Off After Brexit, Says Report

LONDON—No matter what trade deal is struck with the European Union, UK household bills are going to rise after Brexit, according to a report published on July 4.

The report by management consultancy Oliver Wyman comes as the UK enters the final phase of negotiations that will shape its relationship with the largest trading bloc in the world.

The worst scenario—the adoption of World Trade Organization (WTO) rules without a deal with the EU—would leave the average household nearly £1,000 ($1,320) worse off.

“No matter which trade deals are agreed, the fact that the UK is leaving the EU will create new red tape costs for imports coming into the UK from the Customs Union,” said Duncan Brewer, lead author of the report and partner at Oliver Wyman.

“Our research clearly shows that costs from this red tape are always higher than any cost reductions gained from free trade deals, leaving businesses and households worse off after Brexit.”

Free trade deals covering all non-EU countries will only reduce additional household costs by 20 to 45 percent, according to the researchers.

The report says, “We found that if the UK reverts to WTO most-favored nation import tariffs, the price of a typical weekly grocery shop would go up by £5.50 (totaling £280 [$370] across the year), the price of a family meal for four at a high-street restaurant chain would increase by £9, and a pair of trainers would become £6.75 more expensive.”

The report warned that businesses would need “agile” supply chains to adapt to tariffs.

For example, the cost of beef imported from Ireland—used in mass catering and ready meals—will increase, while the cost of Argentinian beef would drop by 40 percent, thus making it the import of choice.

However, businesses reliant on imports of fresh produce will also be vulnerable to additional costs from border paperwork, higher waste, and shortages should there be border delays, said the report.

A weaker pound is also expected to increase costs, with household costs rising by £380 ($500) per year for every 5 percent devaluation in the pound.

Earlier this week, a survey of financial officers showed that pessimism over Brexit among top UK companies has climbed to its highest since the public voted to leave the European Union two years ago.

UK Prime Minister Theresa May is trying to finalize a detailed proposal to put to the EU in the final stages of the negotiations, but has been thwarted by a cabinet riven by different visions of what Brexit should, or can, accomplish.

The lack of clarity is causing “a significant slowdown in business investment,” according to a British Chambers of Commerce report published on July 2.