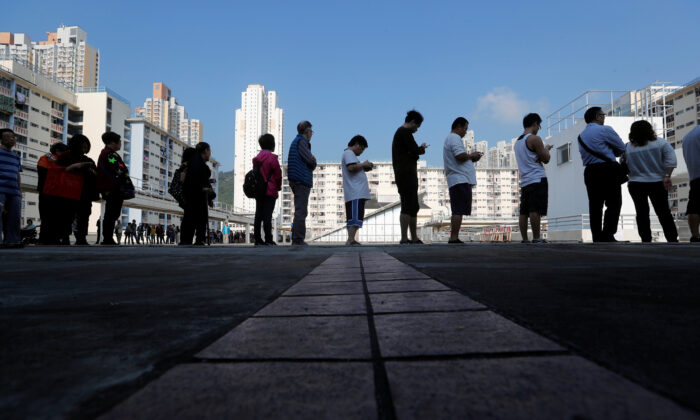 Voters line up at a polling station during district council local elections in Hong Kong, on Nov. 24, 2019. (Adnan Abidi/Reuters)
Thinking About China

There’s a 30-page bill sitting on President Donald Trump’s desk in the Oval Office, awaiting his signature. It’s called the Hong Kong Human Rights and Democracy Act of 2019, and it puts the United States firmly on the side of greater freedom for the people of Hong Kong.

The bill reiterates the importance of Hong Kong’s autonomy for the United States.

Therefore, the United States must “support the democratic aspirations of the people of Hong Kong,” including the “ultimate aim of the selection of the Chief Executive and all members of the Legislative Council by universal suffrage.”

The bill requires the U.S. secretary of state to certify, at a minimum of once every year, that Hong Kong is sufficiently autonomous from the PRC to warrant U.S. support.  The secretary must certify that the government of Hong Kong fulfills the requirements for freedom of speech, press, assembly, expression, universal suffrage, and all other rights “enumerated in the Universal Declaration of Human Rights, done at Paris December 10, 1948, and the International Covenant on Civil and Political Rights, done at New York December 19, 1966.”

Moreover, the secretary of state must ensure that pro-democracy demonstrators aren’t deprived of U.S. visas because of their political views, and he must encourage U.S. allies to join with the United States in granting visas to Hong Kong students who wish to come to the West for study. Sanctions can be used against anyone who punishes demonstrators in Hong Kong, particularly if that person is a member of the Chinese Communist Party.

Finally, the bill requires the executive branch to assure Congress that Hong Kong is in compliance with U.S. export controls, and that Hong Kong not be used as an intermediary for transshipping dual-use technology to third countries. Particular attention is to be paid to modern systems of crowd control, such as “Sharp Eyes, Skynet, Integrated Joint Operations Platform, or other systems of mass surveillance and predictive policing; or the ‘social credit system’ of the People’s Republic of China.”

Trump is reportedly troubled by this bill, because it will make more difficult the negotiations on a trade agreement between the United States and the People’s Republic of China. Indeed, he seems to think that the Hong Kong demonstrations help him put pressure on Beijing to be more accommodating on the trade issue, and he relishes the opportunity to bring Henry Kissinger into the picture. The two New Yorkers are old friends, and it can’t be accidental that they appear in tandem in The Wall Street Journal’s coverage of the story.

Like Kissinger, Trump is forever looking for deals to be done, even though he knows it won’t always be possible.

The trade negotiations are about to resume, and the White House is undoubtedly hoping that the Chinese will quickly agree to terms favorable to Washington.

The joker in the deck is Congress, which passed the bill with near-unanimity, a clear sign that a presidential veto might be overruled. And although top advisers to the Trump administration insist that the Democracy and Human Rights Act need not complicate the trade talks, the contrary case can easily be made.

Thus, we may end up with a truly bizarre outcome: the president may be forced to put pressure on China, even though he doesn’t want to, and Chinese democrats will find at least temporary allies in the U.S. Congress. The Chinese communists don’t like this bill.  They saw leaders of the pro-democracy movement come to Washington to lobby for the bill, and they know there is a tacit alliance between the pro-democracy forces and the rank and file on Capitol Hill.

The president should sign the bill, rather than vetoing it and facing a congressional override.

Michael Ledeen is freedom scholar at Foundation for Defense of Democracies. He has served as a consultant to the National Security Council and the departments of State and Defense, and as a special adviser to the Secretary of State. He is the author of 35 books, most recently “Field of Fight: How to Win the War Against Radical Islam and its Allies,” co-authored with retired Lt. Gen. Michael T. Flynn.

Michael Ledeen
Follow
Michael Ledeen is freedom scholar at Foundation for Defense of Democracies. He has served as a consultant to the National Security Council and the departments of State and Defense, and as a special adviser to the Secretary of State. He is the author of 35 books, most recently “Field of Fight: How to Win the War Against Radical Islam and its Allies,” co-authored with retired Lt. Gen. Michael T. Flynn.