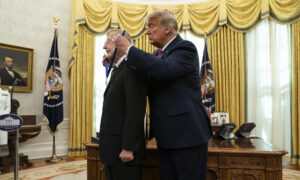 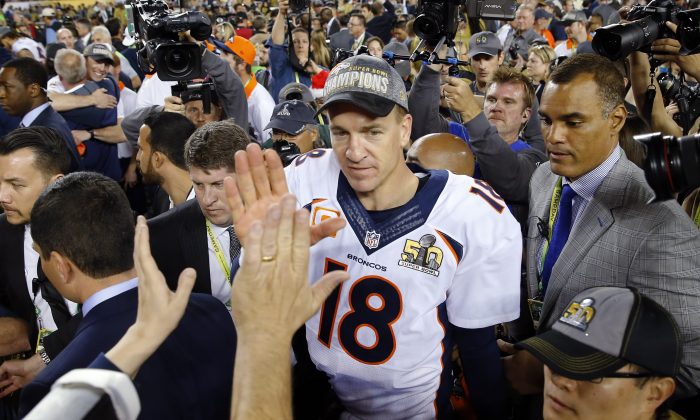 SANTA CLARA, Calif.—The best thing for Peyton Manning is that he won the Super Bowl.

A close second—he never has to lace ’em up again.

Constantly harassed, never quite comfortable—sort of the way the whole season has played out—Manning walked away with his second Super Bowl title Sunday night, after Denver’s defense all but handed him the Lombardi Trophy with a 24-10 victory over the Carolina Panthers.

Manning wouldn’t budge on whether this was, in fact, his last game.

Manning wouldn’t budge on whether this was, in fact, his last game.

“I’ll take some time to reflect,” he said. “I’ve got a couple priorities first. I’m going to go kiss my wife and kids.”

If he bothers watching his last game, he’ll see a quarterback who looked all of his 39 years and more.

He was creaky, off-target at times. He got bamboozled into his first interception of this year’s playoffs and could’ve thrown a few more had the Panthers’ defenders had better hands. Manning lost a fumble, as well.


His most important throw? A pass that flew 10 yards out of the end zone but drew a defensive holding call that set up the game-clinching touchdown. He also completed 13 passes for 141 yards and got the Broncos moving to start both halves.

That was more than enough. Those small wisps of offense were enough to set up a few field goals, keep the Broncos in good field position most of the night—then get the heck out of the way and let a smothering, historically good defense win this game with seven sacks and four turnovers.

Denver was on the verge of becoming the first team in the 50-year history of the Super Bowl to win without scoring a touchdown on offense. MVP Von Miller’s second strip of Cam Newton gave the Broncos at the Carolina 4. Three plays later, helped by the holding call, the Broncos had the touchdown and the game was over.

Manning became the first quarterback to win the Super Bowl with two franchises. He joined his brother, Eli, and 10 other quarterbacks as multiple Super Bowl winners. He’s been taking it week by week this year, insisting he’s not thinking about what he’ll do after the season. Now that it’s over, he’ll have to decide whether he wants to walk away on top—same as his boss, John Elway, did after he won his second title back in 1999.

Hard to imagine he’d want to come back, after guiding the Broncos to a full-team-effort title, the likes of which hardly anyone envisioned when Elway signed him four years ago.

Manning spent the first three of those years rewriting the record book. In Year 4, he was injured and diminished, and it turned into the best finish of the four.

He won the title this season playing the role of game manager. He won with a Super Bowl passer rating of 56.6 that, unbelievably, wasn’t that much lower than what he compiled this season.

A game like this that would normally send him scurrying to the film room, trying to figure out how to make things better for next week.

Next week doesn’t matter. Next year might not either.

“You get asked a lot of questions,” Manning said. “You reflect on the coaches, family members, friends who’ve helped you get to … this point. I’m very grateful. “