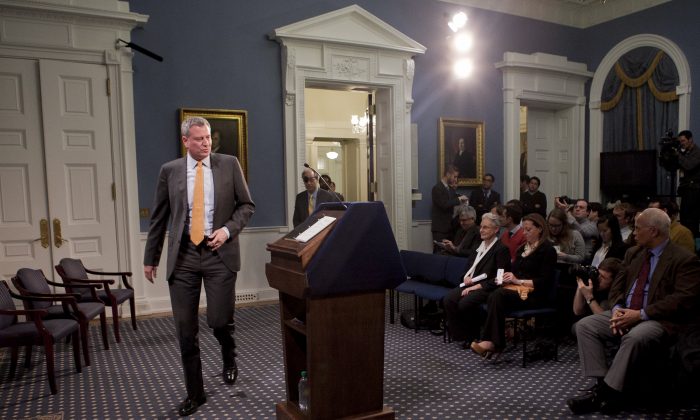 New York Mayor Bill de Blasio last week announced his choice to head the city’s massive welfare agency: Steve Banks, attorney in chief of the Legal Aid Society. It was hard not to be awed by the sheer brazenness of the appointment. Banks and Legal Aid have spent the last three decades fighting to expand public assistance and housing entitlements in the city and to slow down the pioneering welfare reforms initiated by Mayor Rudolph Giuliani in 1995.

With his choice of Banks, de Blasio has signaled that he’s not interested in even the illusion that he seeks nonpartisan technocratic managers for his administration. Instead, he is committed to bringing into the heart of City Hall the aggressive left-wing advocacy that constituted his own brief private-sector experience.

Banks’s appointment as commissioner of the Human Resources Administration (HRA) likely portends rollbacks to the substantive areas of welfare reform, such as work requirements and anti-fraud checks. It also raises a subtler question of conflict of interest. Like many so-called public interest outfits, the Legal Aid Society has proven masterful at stretching out its fee-generating class action lawsuits against the city long after the suits’ initial complaints were resolved.

The society has kept alive a suit from 1998 that initially sought to block the rollout of welfare job centers, a key component of the Giuliani administration’s effort to nudge welfare recipients into the workforce. Though the initial claims in that suit, Reynolds v. Giuliani, have long since been resolved, Legal Aid is still receiving quarterly reports from the city regarding its compliance with the (allegedly) final judgment.

Another suit, from 1996, Davila v. Turner, claimed that the city was not taking the preferences of unwed mothers sufficiently into account in deciding whether to assign them to a workfare job instead of to “education and training.” The Legal Aid Society is still overseeing the city’s performance in assessing single mothers’ education inclinations; it has recently added to the case’s purview the issue of whether homework can count toward the hours that a recipient must devote to work or training.

As the head of Legal Aid, Banks was ultimately responsible for Reynolds, Davila, and other cases against the city. Without impugning his personal or professional integrity, it is fair to ask how he will respond to Legal Aid’s suits against the Human Resources Administration now that he, as commissioner, will be the defendant.

Will he guard the city’s interests in protecting taxpayer resources and promoting work as zealously as he once advocated for expending city funds on transfer payments and other public assistance? Will he hold the Legal Aid Society and other advocacy groups at arms’ length, or will he regard them as a brain trust and policymaking extension of the Human Resources Administration? To be sure, attorneys specialize in being able to switch sides as professional circumstances dictate, but even assuming good faith, it would be hard for anyone to transfer his allegiances and instincts so completely.

Mayor de Blasio has been willing to sell out his police force to signal his progressive values: He not only dropped the city’s appeal of a defamatory court opinion against the New York Police Department and agreed to a federal monitor for the department, but also acceded to a misguided City Council bill that makes it easier to sue individual police officers for alleged profiling, racial and otherwise.

If Banks backtracks on HRA’s commitment to placing welfare recipients in jobs, however, he will be selling out the poor themselves, who are often among the most enthusiastic backers of welfare reform.