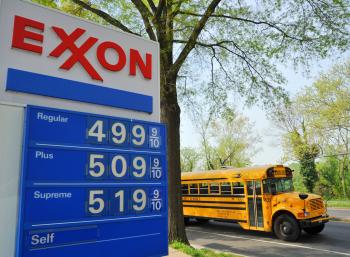 In this April 20, 2011 photo an Exxon gas station near the Watergate complex in Washington, DC shows gas prices at $5 per gallon. (Karen Bleier/AFP/Getty Images)
US

By Mary Silver
Print
President Obama this week called for an end to current subsidies to oil and gas companies. He said those industries get $4 billion each year from taxpayers.

"That’s $4 billion of your money going to these companies when they’re making record profits and you’re paying near record prices at the pump. It has to stop," he said.

In his weekly address, he spoke of the hardship rising gas prices cause people. “Your paycheck isn’t getting bigger, while the cost of everything from college for your kids to gas for your car keeps rising. That’s something on a lot of people’s minds right now, with gas prices at $4 a gallon. It’s just another burden when things were already pretty tough.”

Politicians try to score points when gas prices go up, he said. They go on TV and put out plans to bring gas prices down. “The truth is, there’s no silver bullet that can bring down gas prices right away.”

Responsible domestic production is one necessary step, he said, alluding to last year’s oil spill. His administration suspended drilling in the Gulf of Mexico for months during the accident, and is scrutinizing offshore drilling permits more carefully than in the past. But he said domestic oil production is now the highest it has been since 2003

Obama called for investments, including government investments, in alternative energy. He decried the Republican budget proposal in Congress which “cuts our investments in clean energy by 70 percent. Yes, we have to get rid of wasteful spending—and make no mistake, we’re going through every line of the budget scouring for savings."

Added the President, "But we can do that without sacrificing our future. We can do that while still investing in the technologies that will create jobs and allow the United States to lead the world in new industries.”