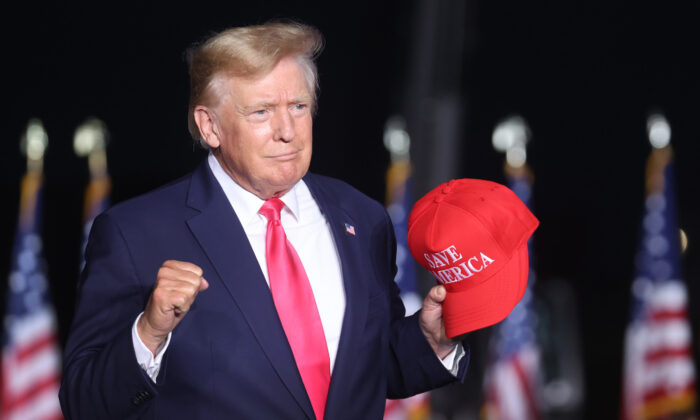 No Legal Basis for Barring Trump From Running Again After Mar-a-Lago Raid: Experts

The FBI’s raid on Aug. 8 of former President Donald Trump’s Mar-a-Lago residence, as part of an investigation into documents allegedly removed from the White House when Trump departed in 2021, is highly unlikely to produce any evidence that could form part of a legal case for disallowing the former president from seeking office again, according to legal experts.

Alan Dershowitz, the noted Harvard University professor, author, and commentator on legal controversies, was unequivocal about the illegality of such a potential maneuver.

“That would be unconstitutional,” Dershowitz said in an email to The Epoch Times.

The search warrant used as a basis for the raid is currently under seal, and it may be some time before the official pretext for the raid comes to light. But based on the facts now known, Democrats in Congress looking for a means to preempt Trump’s expected announcement regarding 2024, and bar him from running again, have little legal recourse, experts said.

Earlier this year, the National Records and Archives Administration (NARA) recovered 15 boxes of records from Mar-a-Lago, some of which included materials “marked as classified national security information.” At the time, Trump said that the documents were given to NARA upon request and “in an ordinary and routine process to ensure the preservation of my legacy and in accordance with the Presidential Records Act.”

The Presidential Records Act of 1978 established a detailed protocol regarding the ownership and transfer of official records of presidents and vice presidents. Among its provisions are that any records transfer into the legal custody of a federal archivist as soon as the president is out of office.

Some lawmakers may seek to invoke 18 U.S. Code §2071, the first clause of which states, “Whoever willfully and unlawfully conceals, removes, mutilates, obliterates, or destroys, or attempts to do so, or, with intent to do so takes and carries away any record, proceeding, map, book, paper, document, or other thing, filed or deposited with any clerk or officer of any court of the United States, or in any public office, or with any judicial or public officer of the United States, shall be fined under this title or imprisoned not more than three years, or both.”

Even if Trump’s foes manage to convict him under this statute, it does not in any way override or supersede the explicit language of the Constitution regarding the requirements for the presidency, Eugene Mazo, a professor of law at Seton Hall University in South Orange, New Jersey, told The Epoch Times.

“The reason they can’t use it is that the Constitution enumerates what you have to do to become president. We’ve had all kinds of litigation over it, not with regard to presidents, but to congresspeople and senators,” Mazo said.

The Supreme Court has weighed in on this very question in its 5-4 decision in the case of U.S. Term Limits, Inc. v. Thornton in 1995, Mazo noted. In that case, the Court found that Section 3 of Amendment 73 to Arkansas’s state constitution, which sought to impose term limits not found in the federal Constitution on candidates for the U.S. House of Representatives, was unconstitutional.

By the same token, in a hypothetical scenario where Trump is tried and convicted in federal court for transferring documents from the White House to Mar-a-Lago, any attempt to use the conviction to thwart his future presidential prospects is all but certain to fail. The Constitution clearly sets forth requirements for becoming president—a minimum age of 35, and being a natural-born citizen who has lived in the country for at least 14 years—and no one has the legal authority to expand the requirements arbitrarily, Mazo argued.

“It’s not a liberal thing or a conservative thing, it’s just what the Court has said in analogous situations,” Mazo said.

A further obstacle to any effort on Democrats’ part to thwart Trump’s ambitions for a second term is the sheer amount of time it would take to initiate and conduct a trial for any alleged misdeeds involving the documents, Mazo continued.

“If Congress is going to act, it doesn’t have a lot of time, because the midterms are coming. The Democrats have a very thin majority, and they can’t lose any votes, if they try to act to bar Trump from running,” he said.

“Most people think that Merrick Garland has a very difficult job ahead of him,” Mazo added.

No Question of Insurrection

Another statute commonly invoked by enemies of Trump—Section 3 of the Fourteenth Amendment—has even less bearing on the developing story of the transferred documents, at least based on the facts now known, according to legal experts.

That section reads, “No person shall be a Senator or Representative in Congress, or elector of President and Vice-President, or hold any office, civil or military, under the United States, or under any State, who, having previously taken an oath, as a member of Congress, or as an officer of the United States, or as a member of any State legislature, or as an executive or judicial officer of any State, to support the Constitution of the United States, shall have engaged in insurrection or rebellion against the same, or given aid or comfort to the enemies thereof. But Congress may by a vote of two-thirds of each House, remove such disability.”

Even the most generous reading of this text will find no language pertaining to the removal of documents, experts concurred.

In agreement with Mazo on the unlikelihood of Trump facing legal hurdles to running again is Derek T. Muller, a professor of law at the University of Iowa College of Law in Iowa City. Muller told The Epoch Times that a consensus exists that Congress cannot add new qualifications to candidates seeking federal office and spontaneously decide that someone convicted of having removed documents he should not have removed is therefore ineligible to run for office.

“The Supreme Court has expressly held so in 1969, in Powell v. McCormack, for congressional elections. Most have accepted that the logic extends to presidential elections, too,” Muller said.

“The qualifications (or disqualifications) for office are enumerated in the Constitution. Congress cannot add to them or remove from them. If Trump is convicted of a felony, he is still eligible for the office. Only if, say, Section 3 of the Fourteenth Amendment applied would he be disqualified, because that is a constitutional standard.”

Though the Jan. 6 hearings are still playing out, nothing alleged in the separate and unrelated issue of the transfer of the documents to Mar-a-Lago comes close to disqualifying the former president under Section 3 of the Fourteenth Amendment.

Not Out of the Woods

The unlikelihood of a successful attempt at the federal level to thwart Trump’s future plans does not mean that he is certain to avoid any negative consequences if the Mar-a-Lago raid furnishes evidence that results in a conviction.

While Mazo finds it unlikely that the national Republican Party leadership will decline to cooperate with Trump in any capacity, there is still the possibility that some GOP state officials may raise concerns.

“The Republican party in some states could bar him from running in their primary. I don’t think that national party is going to do that, but the party in Connecticut or Vermont might say, ‘This person has been convicted of a federal crime,’” Mazo said.

“That could happen, but my guess is that it would only be in blue states and he’s not going to win those electoral votes anyway,” Mazo added.