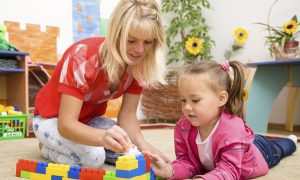 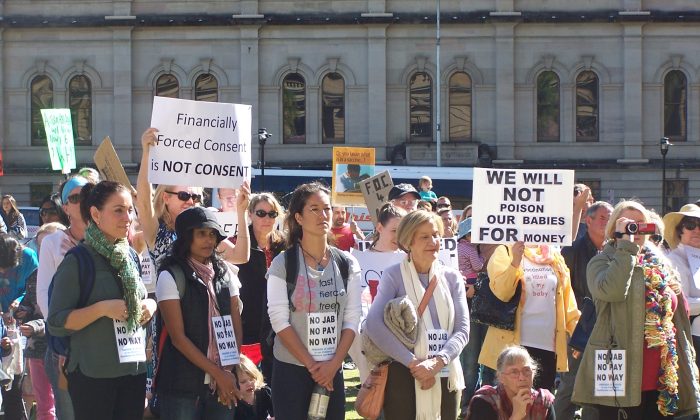 Supporters with banners at NO JAB, NO PAY, NO WAY rally at Queens Square, Brisbane on June 22, 2015. (Laurel Andress/Epoch Times)
Australia

No Jab: No Play and No Pay for Child Care

BRISBANE, Australia—Conscientious objectors against Prime Minister Tony Abbott’s ‘no jab, no pay’ policy held a rally and parade in Brisbane city centre on Sunday June 22, 2015. Speakers addressed parents continuing to have a choice on immunisation of their children, making an informed decision, and continuing employment – by using childcare facilities and receiving childcare rebates.

Tony Abbott announced his ‘no jab, no pay’ policy on April 12, 2015. Conscientious objector exemption on child vaccination to receive childcare benefits will end on Jan. 1, 2016.

Parents who refuse to vaccinate their children will be denied up to $A15,000 ($US11,665) a year in childcare rebates. According to the Australian government, 39,000 children aged under seven are not vaccinated because their parents are vaccine objectors. This is an increase of more than 24,000 children over 10 years.

The government states that the choice made by families not to immunise their children is not supported by public policy or medical research nor should such action be supported by taxpayers in the form of child care payments.

Tammy from Manly, Brisbane, participated with her three children, who are vaccinated. She believes that everyone should have a choice: “It should be absolutely in the parents hands and I don’t believe that a government should take control of the health aspect of raising my kids, I believe that they’re not educated enough.” As a nutritionist, Tammy said: “I always recommend people to do their own research, to find out for themselves. I don’t say yes and I don’t say no.” She added: “You really need to look deeper than what you’re told on an everyday basis, just don’t swallow what you’re told on TV. Look deeper.”

Mike spoke about his personal experiences with Asperger’s syndrome: “Even though it hasn’t been scientifically proven, I got massive convulsions after I got vaccinated for measles. And I believe that was the trigger for my Asperger’s.” Mike supports “informed consent” because he doesn’t want anyone else to get autism and go through what he did in his childhood. He would have preferred to have measles rather than Asperger’s.

Chris Savage, former sergeant of police in the Queensland Police Service from 1989 to 2002 centred in Zillmere, Biloela, Townsville and Ipswich, spoke about his experiences on the job with infant deaths. He believes that the cause of infant deaths can stem directly from vaccination. At sudden death scenes where the baby was deceased with attempts at revival, Chris said: “I would ask the mother what was the baby’s health like prior to the vaccine. It was almost like a light coming on. The baby was eating, sleeping, serene in their arms, growing normally, and it was only after the vaccine that all hell broke loose with convulsions, seizures, and finally dying.” Chris recommends visiting www.novaccine.com to become informed.

Some supporters fear giving up their jobs to stay at home to look after their babies and/or young children because they will not be able to afford child care fees without receiving the rebate. They don’t know how their husband’s income alone will cover normal living expenses.