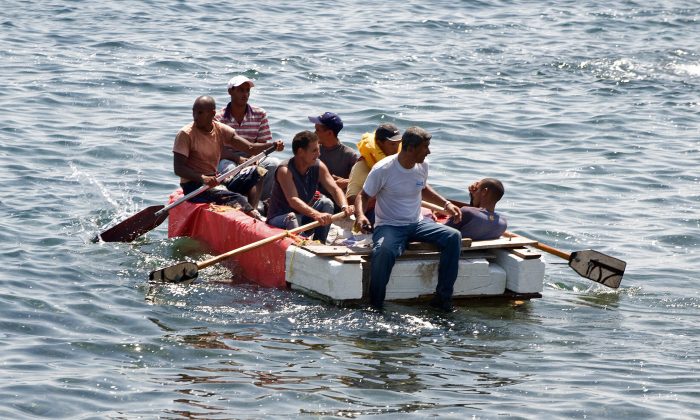 Seven would-be Cuban emigres remain in a homemade boat moments before being arrested by Cuban military agents after their attempt to escape from the island nation was thwarted by the sea currents, on June 4, 2009 in Havana. (Adalberto Roque/AFP/Getty Images)
US

No Immigration Privileges for Cubans Under Trump’s New Policy

President Donald Trump reversed Obama’s relaxed stance towards Cuba at a June 16 announcement in Miami. He left, however, one part in place—Obama’s cancellation of immigration privileges for Cubans—the wet-foot-dry-foot policy.

For decades, every Cuban able to set foot on American soil could apply for a green card. Obama discarded that policy, making Cubans escaping political persecution apply for asylum the same way other immigrants can.

That has drawn criticism from those in the Cuban American community who don’t see why the policy should change when Cubans still face the same political repressions as before.

The Cuban regime released 53 political prisoners as a token of Obama’s thaw, Human Rights Watch reported. But it detained over 8,600 for political reasons in 2015, according to Amnesty International.

Trump said he decided against restoring the wet-foot-dry-foot policy to prevent Cubans from attempting to cross the Straits of Florida—an often dangerous journey on homemade boats.

But there may be other reasons too.

Increasing numbers of Cubans entered the United States in recent years, reaching a peak of just below 54,400 in 2015.

But many of them, especially the younger generation, are less motivated by a desire for freedom and only move to the United States to make money, according to Fernando Menéndez, a Cuban immigrant and expert on the island’s economy at the Center for a Secure Free Society, a Washington-based think tank.

Some Cubans even come because American welfare benefits outpace those in Cuba, he told The Epoch Times last year.

To give such immigrants green cards automatically, “I don’t think that’s fair to other immigrants who are trying to come through the door,” he said.