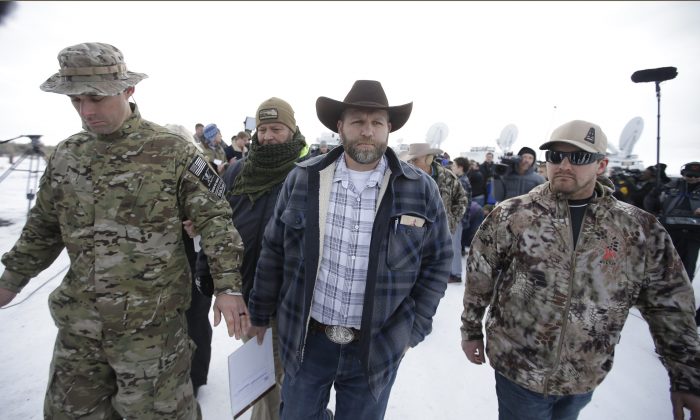 Ammon Bundy, center, one of the sons of Nevada rancher Cliven Bundy, walks off after speaking with reporters during a news conference at Malheur National Wildlife Refuge headquarters near Burns, Ore., on Jan. 4, 2016. (AP Photo/Rick Bowmer)
US

BURNS, Ore.—The armed activists who flocked to a remote wildlife refuge to take a stand against the federal government also looked prepared for a nippy day of hunting or fishing.

They were bundled in camouflage, plaid shirts, ear muffs and cowboy hats in the bleak, snow-covered high desert of eastern Oregon where they seemed more likely to encounter a bird or animal than a member of the public outside their own group or the throng of news media beyond the pickup trucks blocking the entrance to the Malheur National Wildlife Refuge.

That may be one of the main reasons law enforcement hadn’t taken action Monday against the group numbering close to two dozen who were upset about the imprisonment of father-and-son ranchers who set fire to federal land.

“These guys are out in the middle of nowhere, and they haven’t threatened anybody that I know of,” said Jim Glennon, a longtime police commander who now owns the Illinois-based law enforcement training organization Calibre Press. “There’s no hurry. If there’s not an immediate threat to anyone’s life, why create a situation where there would be?”

Schools were closed for the week in Burns, about 30 miles north of the refuge, out of an abundance of caution, but no one had been hurt and no one was being held hostage on Monday.

The takeover puts federal officials in a delicate position of deciding whether to confront the occupiers, risking bloodshed, or stand back and possibly embolden others to directly confront the government.

The activists seized the refuge about 300 miles from Portland on Saturday night as part of a decades-long fight over public lands in the West.

The armed group said it wants an inquiry into whether the government is forcing ranchers off their land after Dwight Hammond and his son, Steven, reported back to prison Monday.

The Hammonds were convicted of arson three years ago for fires on federal land in 2001 and 2006, one of which was set to cover up deer poaching, according to prosecutors. The men served no more than a year until an appeals court judge ruled the terms fell short of minimum sentences that require them to serve about four more years.

Their sentences were a rallying cry for the group calling itself Citizens for Constitutional Freedom, whose mostly male members said they want federal lands turned over to local authorities so people can use them free of U.S. oversight.

The group—led by two of the sons of rancher Cliven Bundy, who was involved in a 2014 Nevada standoff with the government over grazing rights—sent a demand for “redress for grievances” to local, state and federal officials.

“We have exhausted all prudent measures and have been ignored,” Ammon Bundy said.

The group, which included a couple of women and some boys and girls Monday, did not release a copy of its demands and Ammon Bundy would not say what the group would do if it got no response.

President Barack Obama said Monday federal authorities were monitoring the situation, but agents made no apparent moves to surround the property or confront the group—an approach that reflected lessons learned from bloody standoffs at Ruby Ridge, Idaho, and Waco, Texas, in the early 1990s.

That prompted complaints from many observers who suggested the government’s response would have been swifter and more severe had the occupants been Muslim or other minorities.

“There seems to be somewhat of a reluctance to think white people are as dangerous as people of color,” said Heidi Beirich of the Southern Poverty Law Center, which tracks hate groups.

Beirich said the group was emboldened by the government’s failure to hold Cliven Bundy or his supporters accountable in 2014 after hundreds of armed anti-government activists rallied to his defense when federal authorities started seizing his cattle over more than $1 million in unpaid grazing fees.

Michael Barkun, an emeritus professor at Syracuse University who has studied extremist groups, said not confronting the Oregon group could embolden others.

“You can say, well, a negotiated settlement emboldens them,” he said. “But by the same token it deprives them of a confrontation that some of them want.”

The Hammonds have distanced themselves from the protest group and many locals, including people who want to see federal lands made more accessible, don’t want the activists here, fearing they may bring trouble.

Seeds of the dispute date back decades in the West, where the federal government owns about half of all land.

In the 1970s, Nevada and other states pushed for local control over federal land in what was known as the “Sagebrush Rebellion.”

The refuge established in 1908 by President Theodore Roosevelt to protect birds from hunters selling plumes to the hat industry has expanded to 300 square miles over the years.

The valley rimmed by distant mountains contains lakes and marshland and now surrounds the ranch Dwight Hammond bought with his father in 1964.

Hammond said his family resisted pressure to sell the ranch as the federal government chipped away at his grazing allotments and increased fees on other lands.

Ammon Bundy said the group plans to stay at the refuge as long as it takes.

On Monday, the group that includes people from Oregon, Idaho and Nevada, got some company from locals who showed up to at least learn more about their cause.

Tegan Strickland, a high school junior from a ranching family in nearby Crane, said the Hammond’s case had struck a nerve with people who think a way of life is being threatened.

“A lot of people think their land’s being stolen by the government,” Strickland said.