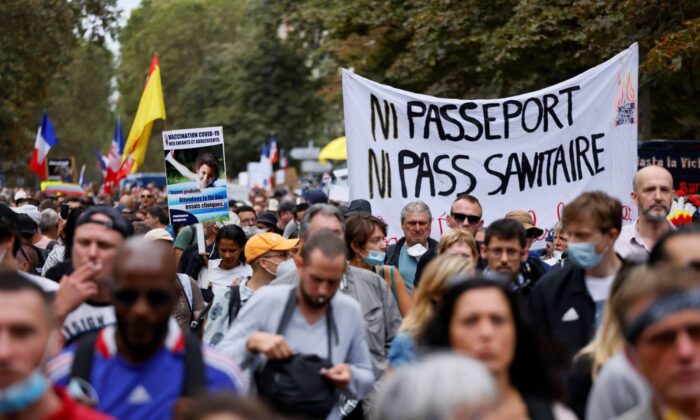 Demonstrators march during a protest against COVID-19 vaccine passports on De Villiers Avenue in Paris on Sept. 11, 2021. The sign reads 'Neither passport nor health pass'. (Thomas Samson/AFP via Getty Images)
Vaccines & Safety

‘No Health Pass’: Tens of Thousands Join Protests Against Vaccine Passports in France

Protesters in France for a ninth consecutive weekend took to the streets to again rally against COVID-19 vaccine passports and mandates.

Video footage showed large numbers of protesters in Paris, Toulouse, and other cities. One video shows protesters clashing with officers in Toulouse.

In early August, during one weekend, the number of demonstrators surpassed 230,000 across different French cities, the ministry said at the time. Those protests occurred shortly after the French top court ruled that the vaccine passport law passed by Parliament was legal.

Protesters have also railed against mandatory vaccinations for all healthcare workers.

The vaccine passport, which is dubbed a health pass by the government, is required by people to enter restaurants, clubs, and a number of other public places. Some media outlets have attempted to characterize the demonstrations as “anti-vaccine,” but many protesters have said they’re against vaccine passports and mandates, not the vaccines themselves.

“This health pass divides French people. I think that is clear,” said civil servant Sophie Soulas at a Paris protest several weeks ago, reported Reuters. “And unfortunately, I believe we should abolish it.”

On Saturday, people were seen holding banners reading “no passport, no health pass.”

Last week, former French health minister Agnes Buzyn was indicted after she was accused of “endangering the lives of others” during her response to COVID-19 early on in the pandemic. Buzyn, who quit her government post in February 2020, told Euro News that she will appeal the case, saying that it is “an excellent opportunity for me to explain myself and to set the record straight.”

“I will not allow the government’s action, my action as minister, to be sullied when we have done so much to prepare our country for a global health crisis which, I would remind you, is still going on,” she added.

In the early part of last year before COVID-19, the illness caused by the CCP (Chinese Communist Party) virus, spread throughout much of the world from Wuhan, China, Buzyn said at the time that she believed it would pose a “very low” risk to France. She was also accused of not adequately preparing France with protective equipment.